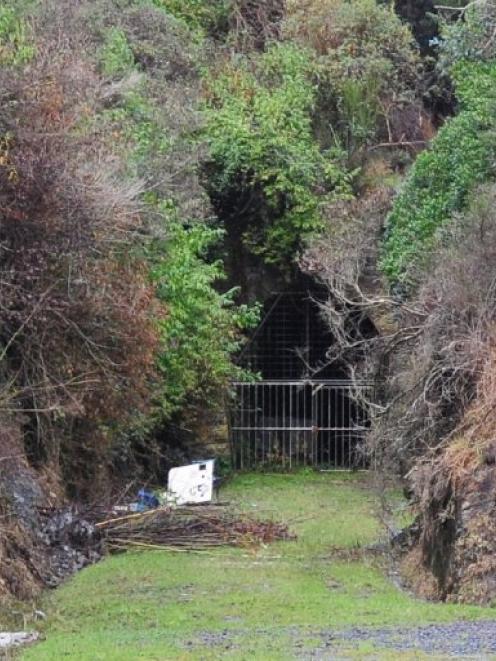 The Chain Hills tunnel. Photo by Craig Baxter.
A walk through the 145-year-old Chain Hills rail tunnel, near Mosgiel, was once the highlight of many Noakes family birthday parties.

Then, says Clare Noakes, who owns the 60ha of bush and farmland at the eastern end of the tunnel, the Dunedin City Council erected gates and locked them shut.

That was about 12 years ago.

Now, Mrs Noakes is one of those who will need to be consulted by Opus International Ltd, which won the $50,000 council contract to complete a feasibility study into whether a cycleway can be created between Dunedin and Mosgiel using the Chain Hills tunnel and another at Caversham.

Mrs Noakes told the Otago Daily Times although the council "never asked" if it could lock up her tunnel, she had no great issue with the closure.

It did end her wandering-stock problems.

As a cyclist, she is delighted at the prospect of the tunnel being reopened so families and children could easily cycle between Dunedin and Mosgiel.

"I've biked into town from out here and it's just a nightmare coping with the traffic and trying to pass parked cars with people passing you and just about squashing you.

"Just to be able to go on the flat is the main thing."

Over the next few weeks, two Opus consultants who have completed a two-day "confined spaces" course in Timaru, will explore the tunnels with gas detectors and breathing apparatus.

The main hazards they face are the council's Silverstream and Wingatui foul sewers which run the length of the 158m tunnel and vent gas.

Mrs Noakes said when her mother, Jean Markham, first bought the land, the tunnel was a popular walkway between Wingatui and Fairfield.

At the western, Wingatui end is a 6ha property owned by Kim Hiko.

He has no objection to the tunnel being used by cyclists but is not keen on the cycleway continuing along the old railway line through the yard that divides his house from his sheds.

The old line is also the access way for two of his neighbours and runs "right past the back door" of another house.

"I'd be all for it, and if they can work something out they can do it. But it's a bit tricky."

Opus is expected to report to the council by the end of June on all issues surrounding the possible creation of the "two tunnels" cycleway.