Change on museum board welcomed 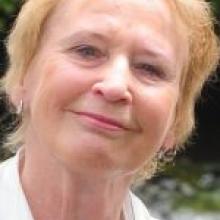 Margaret Collins
Members of a group of former Otago Museum staff are welcoming the prospect of "fresh blood" at the museum's governing trust board, including in its leadership.

In the biggest change in overall board leadership for more than a decade, a new chairman and deputy chairman will be elected tomorrow, at the board's first meeting this year.

Several new appointees are also joining the board, and several long-serving members have recently retired.

Margaret Collins, who has been board chairwoman for 12 years, attended her last meeting as chairwoman late last year.

Clutha district councillor Gaynor Finch will replace her tomorrow as the Clutha council appointee on the board.

Mrs Collins was also a long-serving former councillor and former deputy mayor on both the former Balclutha Borough Council and the later Clutha District Council.

She did not stand again as a councillor in 2007.

However, the council had emphasised that no personal criticism was intended and her extensive work on its behalf had been much appreciated, Mrs Collins has said.

In 2009, Mrs Collins described as "deadwood" some former museum staff members who had been critical of the museum management approach and priorities.

A group of former museum staff has since labelled itself "deadwood central".

A member of that group has welcomed the board changes and said that - far from being "dead wood" - the former staff had contributed strongly to the museum's development.

The group member, who asked not to be named, said there was clearly a risk that long-serving board members could be effectively "captured" by the outlook of the museum's management.

He also took issue with some management priorities, and said an earlier move not to retain a specialist conservator was a backward step, in terms of professional standards.

He hoped that the new board would be more alert to the needs of museum staff and over professional issues, such as the conservator's role.

The board set in place "all necessary policy" and operational matters were thoroughly reported back to the board.

Suggesting that board members might be "captured" by museum staff gave "neither the board nor the staff due credit for their professionalism and commitment".

Through "absolute determination by a committed team of board, management and staff", for more than a decade the museum had been transformed into "a much-loved community asset and key tourism attraction".

This outcome did not warrant "consistent maligning" by critics.

She emphasised that collection care was "not compromised by the absence of an on-site conservator" and by the move to a model of "contracting in specialist conservation".

The museum was "always open to constructive discussions in person" with community members who had concerns but none of the recent critics had opted for this, she said.