The Chase's 'Dark Destroyer' learns one piece of Dunedin trivia

By Daisy Hudson
1 Comment
He had only been in the city for about 20 minutes, but Shaun Wallace already had a piece of Dunedin trivia up his sleeve.

"The only thing I could say about Dunedin is it's Gaelic for Edinburgh, I do know that,'' he said yesterday.

Wallace, the "Dark Destroyer'' in the British television quiz programme The Chase, is touring New Zealand for the second time this year.

He returned to host the 20th annual New Zealand Pub Quiz Championships, and is also visiting cities around the country to "thank the people of New Zealand for making The Chase the No1 show it is today''.

"Although it's a punishing schedule, it's a great road trip,'' he said. 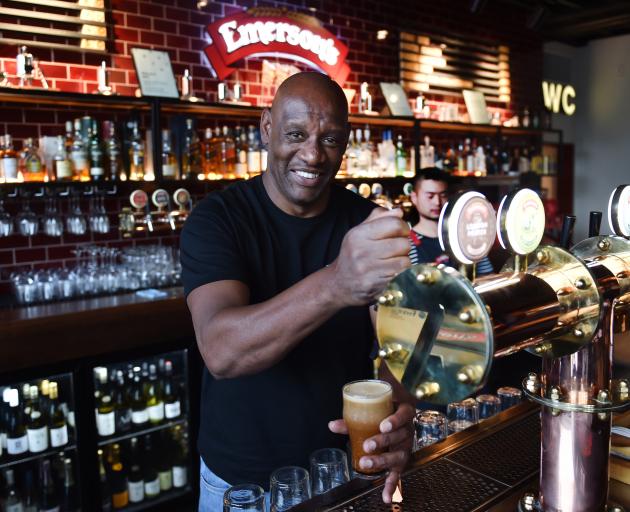 Having a crack at pouring a pint at Emersons in Dunedin yesterday is Shaun Wallace, of the British television quiz programme, The Chase visiting the city for a public talk last night. PHOTO: GREGOR RICHARDSON

He was last in the country in February.

"The first time I came, I knew it was successful [but] I didn't know how successful and popular the show is.''

As to why Kiwis loved the show so much?

That was a combination of host Bradley Walsh, the different personalities of the Chasers, and the questions, he said.

"The type of questions that you're asked - some are easy, some are very witty, and some are so suggestive, it really makes the viewing audience laugh, I think.''

He said he would love to bring the show out to New Zealand for a one-off special, but it would depend on scheduling.

"It can only be organised by the powers that be, but that would be a wonderful thing to do, to actually thank and honour the people of New Zealand.''

He was staying mum about the identity of his new colleague, after Walsh recently let slip that a new Chaser would be joining the show next year.

"If I was to reveal who that person was, I'd probably be lined up against a wall and shot.''

Ok Shaun, where is the steepest street in the world?