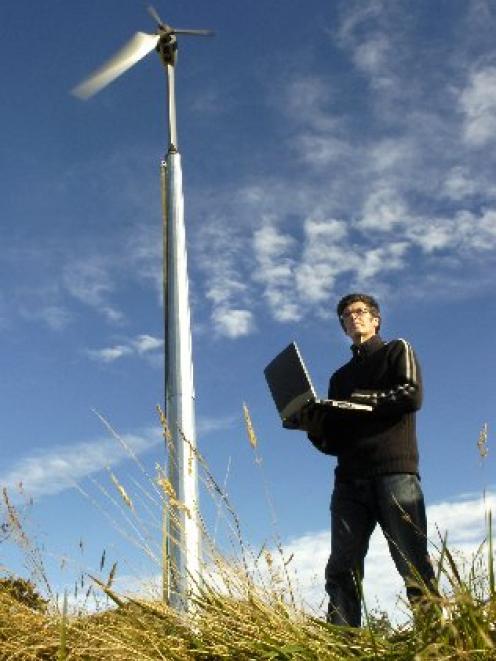 Wayne O'Hara, of Powerhouse Wind Ltd, tests a prototype of a wind turbine developed in Dunedin. Photo by Jane Dawber.
Trials of a new wind turbine made in Dunedin are under way on a breezy hillside above Waitati.

The brainchild of two former Fisher and Paykel engineers, Bill Currie and Wayne O'Hara, the unusual single-blade turbine is one of three prototypes built in a workshop at the former King Edward Technical college.

Mr O'Hara, of Powerhouse Wind Ltd, said the reasonably gentle breezes in the days since the prototype was installed had been ideal, but gradually it would be tested in stronger winds.

He considered one of the benefits of the single-blade design was its ability to shut down automatically when winds became too strong.

"We are able to park the blade in high winds so . . . the machine just sits there and rides out the storm."

In addition, less material was required in construction and the turbines were quieter.

The turbines are designed to start producing power at wind speeds of about 3.5 metres per second (m/s) and are rated at 2kw in a "stiff breeze" of 10m/s or 36kmh.

The prototype is heating a hot water cylinder at the moment but will soon be hooked up to the national grid and the electricity sold to a power company.

Mr O'Hara said there was growing interest in producing and selling electricity but most people were interested in "off-grid" uses because of "the very high charges" for connecting to the grid.

He would not speculate on what the wind turbine might sell for if it was commercialised but said the high cost for individuals was an issue.

"They do cost a lot of money and I'm sure a lot of people are put off because they cost too much.

So if we can get that price down, because the design will allow us to do that, I'm sure we'll be in a good position."

The owner of the property where the prototype has been installed, Hagen Bruggemann, said the tower, foundations and wiring had cost about $10,000.

However, he would begin to get a worthwhile return on his investment once he was selling power to Meridian Energy.