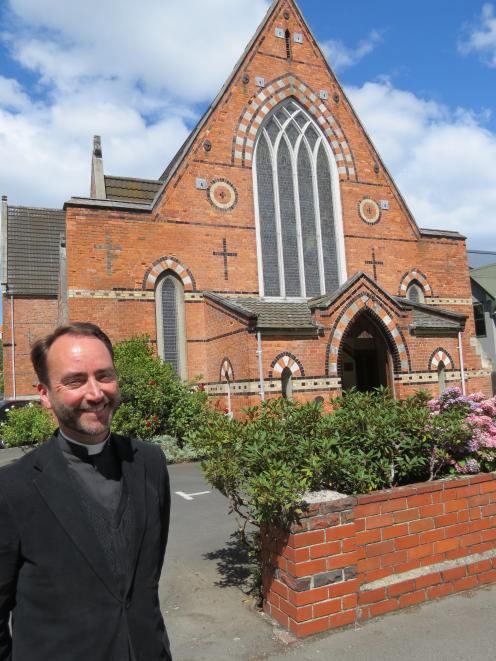 Milestone ... Anglican Parish of Dunedin North vicar the Rev Michael Wallace will be at the 150th anniversary celebrations of All Saints' Anglican Church this Sunday. PHOTO: JONATHAN CHILTON-TOWLE
Dunedin's oldest church that is still used as a church will be celebrating its 150th anniversary at the weekend.

The foundation stone of All Saints' Anglican Church was laid on February 8, 1865, and this Sunday, 150 years later, Dunedin residents are invited to come to the church to celebrate the historic event.

Anglican Parish of Dunedin North vicar the Rev Michael Wallace said the festivities, which will run from 10.30am onwards, would begin at the Peace Pole in front of Otago Museum with a Mihi Whakatau led by Professor John Broughton, some prayers, and the choir would sing the same words that were used in 1865 (Psalm 122).

Those gathered would then progress through the university to All Saints' for the festival service.

In February, 1865, the procession moved from the Dunedin North School House, in Museum Reserve, to the All Saints' site for the laying of the foundation stone, Mr Wallace said.

Two incense burners and a processional cross would be carried at the front of Sunday's procession, followed by two bishops, all the All Saints' clergy, representatives of Kai Tahu and the architectural firm that designed the church, laity, All Saints' friends and supporters, and children and youth carrying banners and flags, accompanied by a brass trio.

Bishop of Dunedin the Rt Rev Dr Kelvin Wright would lead the liturgy, which would include choral, organ and trumpet music, Mr Wallace said.

During the proceedings the children's area would be full of building blocks and children of all ages would be invited to think about how to build up the church.

At the end of the Mass, the bishops would bless a commemorative plaque and the participants would gather for lunch at Selwyn College.

After lunch, the bishops would bless and open the exhibition in the church celebrating 150 years of All Saints', Mr Wallace said. The exhibition would have 14 themed panels which told the story of All Saints' from 1865 in words and pictures. Sunday's events were the first part of the 150th celebrations, he said.

Throughout 2015 there would be concerts and exhibitions in the church to celebrate 150 years.

On July 19, there would be a celebration of the opening of the doors of the church in 1865 and on November 1, Archbishop the Most Rev Phillip Richardson would preside at All Saints' Day celebrations.