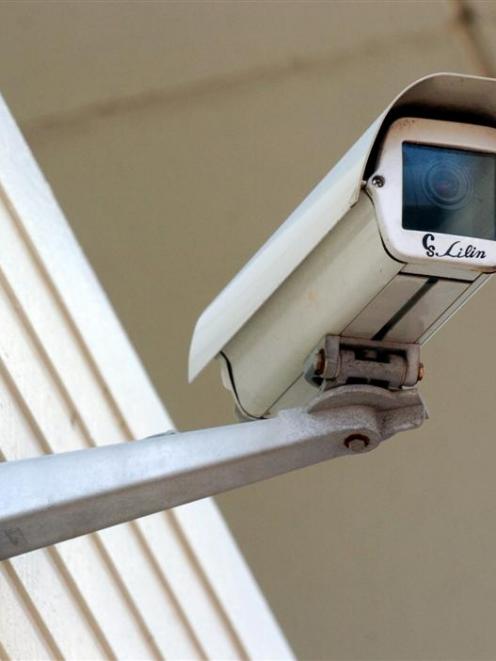 A Dunedin City Council property department CCTV camera. Photo by Gerard O'Brien.
Nearly four years after Dunedin city leaders began discussing the installation of closed circuit television security cameras in the central city, there are still none to be seen.

Those involved in the project say that is because they want to "do this once and do it right".

And installation of the cameras could be some time away yet.

The Dunedin City Council has decided to fund the installation this financial year, but what form the network will take will not be known until next month.

The main problem is where the extra funding to get the network operating will come from.

Discussions on installing the cameras in the central city began in 2006.

A 2008 feasibility study culminated last year in a $150,000 commitment from the council, to be charged through rates, for setting up an initial network in the lower Octagon this financial year.

A further $50,000 required was to be provided from external sources.

Council customer advocate Adrian Blair said since the funding decision was made in June, a further report, on the type of cameras and how best to transmit the images, had been commissioned; several cameras had been trialled for coverage and quality; and about six applications for the $50,000 had been made to charitable trusts.

But some applications had already been rejected.

The report had nearly been completed and its options would be considered on February 12 by the City Safety Leaders Forum, which would make the final decision on the form the CCTV network would take.

However, the issue of the extra funding required still remained.

"It's the main impediment at the moment."

Council customer services general manager Grant Strang said the council was committed to CCTV and the project would definitely go ahead.

It was just a question of when.

It was hoped it would be this financial year but, if not, the money could be carried over to next year, with council approval.

Mr Blair said the cameras would be monitored at the Dunedin Central Police Station by volunteers.

There would have to be recruiting and training of volunteers before the system was ready to operate.

Dunedin city councillor Neil Collins, who has lobbied for CCTV in the central city for the past 10 years, called the project "the slowest thing on earth".

He said he had asked for a report on why it was taking so long.

But Mr Blair said it was useful to remember the first three years of discussions were purely about whether CCTV was actually needed in Dunedin.

Since the decision was made last June to go ahead with it, a lot of work had been done.

It was important that what Dunedin needed was achieved within the budget, he said.

Dunedin police area commander Inspector Dave Campbell, who is a member of the City Leaders Safety Forum, said because installing CCTV cost so much, the forum wanted to do it once and do it right.

Getting the right coverage and quality footage was important, hence the importance of the decision on how the information would be transferred, whether it was fibre optic cables or tapping into any future broadband system, he said.

Police received much CCTV footage from private companies, but the quality was often too poor to be of any use.

"It's not worth doing unless you do it properly."

Once the network set-up was worked out, he was confident it would not take long to install monitors at the police station and to train volunteers.

He had received indications of interest in the work from local community watch teams, who already worked closely with police.