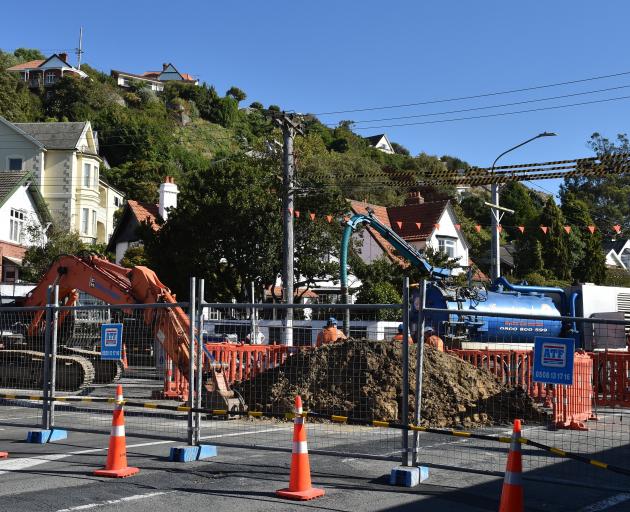 Kerb and channel work is set to be slashed, work on fixing footpaths could be scaled back and the road re-sealing budget trimmed. PHOTO: GREGOR RICHARDSON
A funding shortfall of almost $35million across three years could force the Dunedin City Council to cut back on planned roads maintenance or dip further into ratepayers’ pockets.

As a result, kerb and channel work is set to be slashed, work on fixing footpaths could be scaled back and the road re-sealing budget trimmed.

Dunedin City Council infrastructure services general manager Simon Drew said the council was in a sustainable position in the short term for the 2021-24 programme.

However, the council’s bid to the transport agency was based on what was needed to maintain assets at an appropriate level and the funding shortfall could mean the council might need to pick up a greater share of the burden of its roading programme in future.

Dunedin ratepayers are already looking at a rates rise of 9.8% for next year and rates increases for the next two years are forecast to be about 7%.

Cr Lee Vandervis asked at a meeting last week if the situation created a deferred maintenance issue for the DCC.

Council transport group manager Jeanine Benson replied that it did.

Cr Jim O’Malley said the lack of money in the transport agency’s pot would create a backlog for all local councils in New Zealand, unless there was a top-up.

The transport agency has said funding, though down on what councils had expected, was up on the allocations from three years ago.
Dunedin was allocated a subsidy for $82million of roads maintenance work for 2018-21.

The timing of the transport agency’s funding indications came under fire at a Waitaki District Council meeting last week and the Government aggravated ill-feeling by announcing a $785million standalone cycling and walking bridge across the Waitemata Harbour.

The cost of the Auckland project would far outweigh the benefits, preliminary work from the transport agency found.

I don't get it. Our rates increase massively. Spending on endless cycleways continues. I can't help think this neglect of roads under this government and it's sympathetic councils has an ideologically driven agenda.

Take a look at the work that is being done! It's to such a poor standard that within months pot holes are opening on freshly sealed roads! I don't see how that is in the best interest of the community's spending.. How much does it cost us to fix up and re-do roads that weren't done right the first time around? Everyone wants safe roads that will last, it's a slap in the face when our council money is going to contractors who want to make a buck and don't care about the community.

Worse yet when the jobs are outsourced to companies outside of Dunedin. Citycare is a Christchurch company and the council phones are answered somewhere up north after hours.

Oh dear... never mind.
I'm sure our local and central governments will find a mechanism to extract the funds from our pockets.
They know their dedication to effectively spending my money for the greater good, far exceeds my abilities, so they are entirely justified in doing so.
Consider the differences in our priorities.
They need to meet the operational needs of Three Waters while I simply want to drain water from around the house and get the loo washer fixed.
They need to revamp solid waste recycling and disposal up to best practice while I need to dump an old concrete path.
My objective of keeping the family warm, feed, educated and engaged, pales with their objective to make the city carbon emissions free by 2030.
My concerns with balancing my bank account this week is nothing compared to their 10 year budgets. Worse still, it's so selfish compared to the greater good and others needs.
I understand these things. That I need to check my privilege. That to give is greater than to receive, so I keep my expectations low.
Dam,.. there's that privilege again, having expectations from good people that are clearly focused on saving the planet.
Please, take my money.

Dcc and Waka Kotahi have the responsibility for the Footpaths and Road Surfaces.
There are a raft of documents on the engineering requirements and standards of these roads and what the minimum Requirements are
If you own a shop and have a slippery vinyl due to negligence that you knew about and someone slips over and becomes permanently disabled you take the responsibility of it.
Take into consideration next time you see an accident on the road or path. Was the road surface fit for purpose.
Take pics in detail of any road you may have an accident on regardless of the fault.

Could the Council please give details on where and when this money was used ... I have a feeling that some of it was used on new, sometimes idiotic, projects that didn't quite come up to standard ... remember this money was for MAINTENANCE of existing roads, and if it used for other purposes, then it's misuse of public funds ... in Dunedin, I believe this carries a penalty of 10 to life driving around and around and around the "roundabout" at St Clair esplanade without going over the lines !!

"Stick your 20 million footbridge, your unused cycleways..."
"Spending on endless cycleways continues."
Except they are not unused are they? And they are only a tiny fraction of the road length in the city. The majority of roads are used by far fewer people than the cycyleways, as are most footpaths. If you really want to reduced the road infrastructure cost, then support reduced speed limits , lighter vehicle requirements ( no large SUV's, heavy utes, etc ), light rail and buses and - yes - more cycyleways. Fewer cars = less wear, less damage and injury = less spending.

As for neglect by this government? Well, to quote Minister Genter '..."National’s mega motorway projects in particular have been blowing out by hundreds of millions over the past term of Government, reducing the amount of money in the transport budget that was available for road safety, public transport and safe cycling,” Genter said.' And the average yearly budget is $1 billion for state highways alone. Huge roading projects and billions spent yearly but its still neglect?

And tell me again which party is proposing, sorry committed, to a bridge for cyclists and walkers at half the price of Dunedins new hospital. A bridge that the same cyclists and walker will refuse to pay tolls for because they are simply entitled to bludge off everyone else. You can't blame the nationals for labour and greens waste on pet projects for the tiny lycra clad crowd.

"A funding shortfall of almost $35million across three years could force the Dunedin City Council to cut back on planned roads maintenance or dip further into ratepayers’ pockets" yeah certain persons on the council will love this, make the roads worse so they get out of their cars will be the cry.
"As a result, kerb and channel work is set to be slashed, work on fixing footpaths could be scaled back and the road re-sealing budget trimmed" well considering there hasn't been much maintenance to begin with.... besides they seem to find enough money for asphalt for speed bumps but not enough for potholes....

So true! Instead of shiny, tiny, technicolour roundabouts and speed bumps - resurface all Dunedin's steepest slippery footpaths + fill in potholes!

DCC can afford to stay within budget, they just need to decide which projects are actually needed vs pet projects that are simply wanted. And ditch some of the vanity ideas.
No different to any other household or business. You can't get a pay rise simply because you want a holiday in St Moritz. So stop the delusion of thinking ratepayers are a bottomless pit of money.
Wake up greens, learn to live within ratepayers means.

The bigger question is how will short fall affect the hospital build, will it affect the proposed roundabout on sh1 by the oval, or the bypass through the very busy strathallen st?