As the Prime Minister consoled and consulted with Dunedin Muslims yesterday they had only two words for her - thank you.

Jacinda Ardern travelled to the city yesterday to show solidarity to the Islamic community following the Christchurch mosque shootings.

Parents huddled outside the Au-Nur Child Education and Care Centre in South Dunedin awaiting her arrival in the morning.

Children proudly sang I Am Muslim to the tune of Frere Jacques and one excited young girl jumped on the leader's knee. 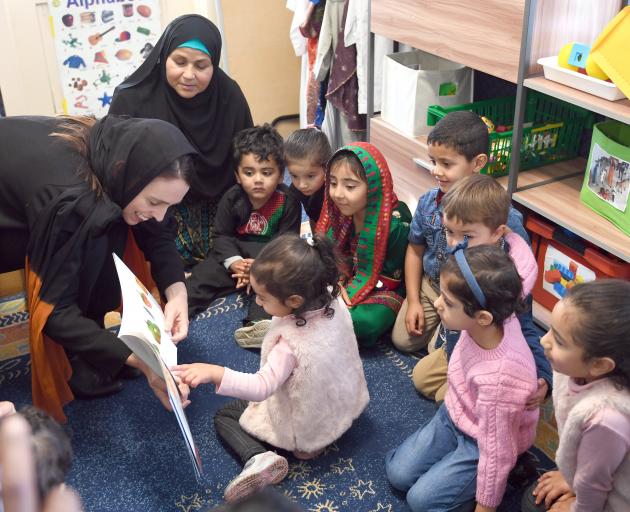 Many of the children sitting on the mat probably did not know who she was, but were excited by the crowds and attention.

''They now feel safer sending their children to Au-Nur.''

She admitted this would not be the case for some parents who still kept them at home out of fear.

In the early afternoon, Ms Ardern spoke to hundreds of Dunedin Muslims at the Al Huda mosque, which was the gunman's original target.

Time was set for people to ask questions, but mainly they simply expressed appreciation.

University of Otago student Aisya Ahmad Zamri said there was a sense of gratitude among the people there.

''We feel overwhelmed by how she showcases her leadership skills. Not every prime minster would come here and do that.''

''We are quite happy with how she has handled this.''

He applauded her acting swiftly after the attacks.

Some at the mosque questioned how the Prime Minister would keep the country safe in the future. She assured them this was at the top of the Government's mind.