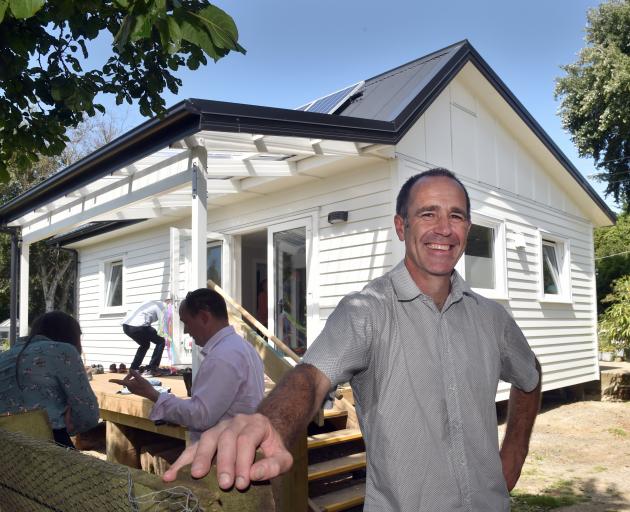 Scott Willis at the opening of the Climate Safe House in Waitati. PHOTO : PETER MCINTOSH
The first-of-its-kind climate-safe house built by the Dunedin community could be off the market.

But the company that owns it, Blueskin Energy Ltd, has declined to comment on its future any further.

Just over a year ago the house was opened amid a rush of publicity.

The eco-house was supposed to be a blueprint that could be used for social housing on private land to help communities affected by climate change.

The company retained ownership and moved its house on to land it leased at a flood-affected Waitati property.

However, after that lease agreement was terminated this year, Blueskin Energy Ltd general manager Scott Willis said the company could not afford to move its relocatable house and it was put up for sale.

Concerns were quickly raised by some in the community.

And when the house failed to sell at auction, receiving a bid of only $100,000, Mr Willis said the company had directed the real estate agent to negotiate with any interested parties.

Now, its listing has been removed from the real estate company’s website and Mr Willis said the company was exploring its options.

He was no longer involved in the matter directly and referred further comment to company director Charles Abraham.

Yesterday, Mr Abraham declined to comment and said media attention at this stage was not productive.

About 40 sponsors gave $200,000 worth of materials, Mr Willis said at the time of the ribbon-cutting opening ceremony last year.

The trust behind the company received $31,000 from the Dunedin City Council’s place-based grants last year.

Among those who took issue with the company’s plans, Otago Polytechnic Ltd chief executive Megan Gibbons said the polytechnic was concerned to learn of the apparent impending sale in November after it provided both financial support and staff time to the project.

Contractors involved in the build were also concerned that what was billed as a community-oriented project was to be unilaterally sold.

Mr Willis has said previously any money generated in a possible sale of the climate-safe house would be put towards another climate-justice project.