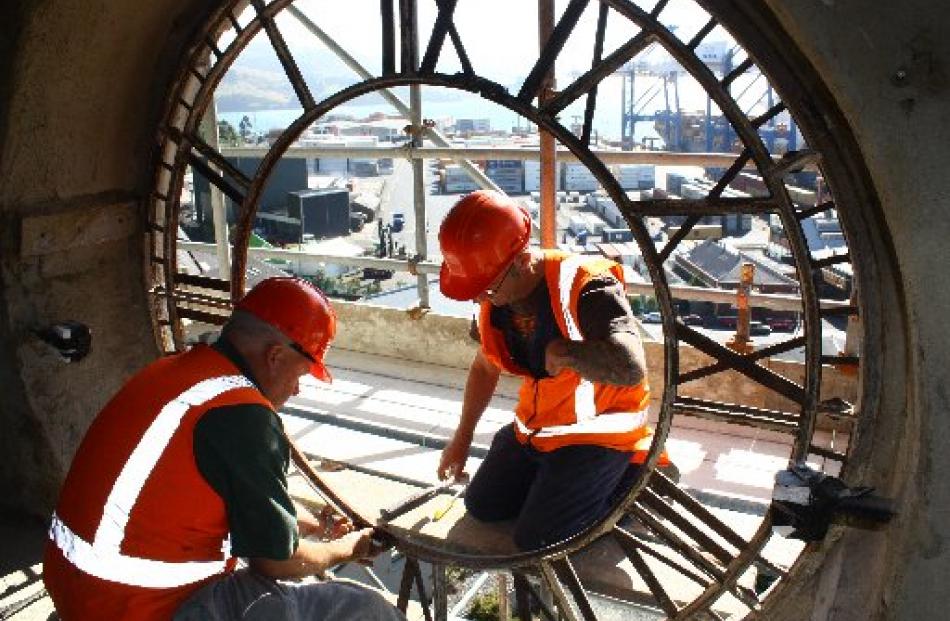 Lawrie Forbes (right) and Alan Bryan, of Zeal Steel, start to remove one of four cast-iron clock faces from the Iona Church bell tower, with Port Otago in the background. Photos by Tim Miller. 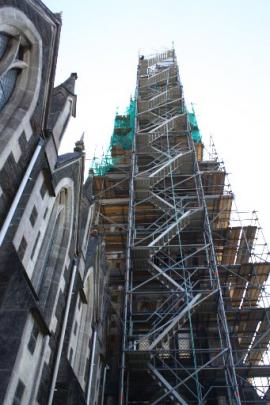 The Iona Church clock face is about to receive some much-needed care and attention after more than 100 years of neglect.

Restoration of the Historic Places Trust Category 1-rated Port Chalmers church started last year after years of planning and fundraising, and the clock face restoration is one of the last parts of the project's first stage.

Zeal Steel owner Lawrie Forbes, who is restoring the faces, said the project was not simple as the age and condition of the faces made the job quite delicate.

Cast iron itself was difficult to refurbish, as it became so brittle the faces could easily break, Mr Forbes said.

''I think we will use a combination of techniques and see which ones work best.

''This work is different from the other restoration I have done so it will be interesting.''

Mr Forbes said it was important to maintain the heritage value of the clock-face, so there would be no quick modern fixes.

The restoration would be done in such a way so that if, in 10 years' time, better techniques such as 3D printing were viable, they could be used, he said.

Historic Iona Church Restoration Trust trustee Lincoln Coe said the clock was a small but important part of the restoration, as the clock tower had been neglected for 50 years or more.

''It was in a pretty sorry way and hadn't received much love, so it's great that it is all finally coming into place.''

Most of the restoration of the older part of the church had been completed. Fixing the belltower and the clock face was one of the final parts of first stage in the restoration, he said.

A stonemason was now working on the main spire, where damage to the Oamaru stone blocks was not as bad as had been thought, he said.

''What that means is we save a bit of money on replacing the blocks and can spend it on other parts of the building,'' Mr Coe said.

The trust was still hoping to find more money for the restoration and if any more became available, work would start on the second stage of the restoration, Mr Coe said.

About $850,000 had been raised but the same amount again would be needed to complete the restoration.