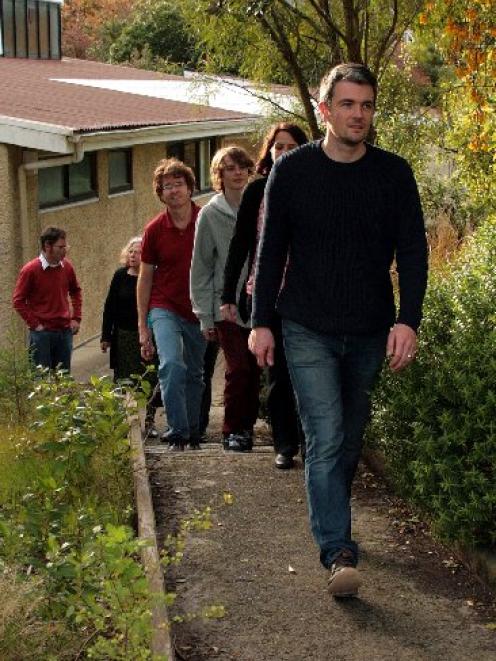 Members of the Urban Cohousing Otepoti group inspect the site of their proposed development at the former High Street School. At the front is Tim Ross, followed by Susan Jack, Kaleb Jack and Kristin Jack. At the back of the group, Sue Taylor talks with Alex King. Photo by Dan Hutchinson.
A group of Dunedin families has bought the former High Street School and will now start shaping their ideal neighbourhood. Dan Hutchinson takes a look at what the group is all about.

A mothballed central Dunedin school is to be given a new lease of life as a ''co-housing'' development involving about 20 families.

Urban Cohousing Otepoti Ltd has bought the lion's share of the former High Street School and plans to build medium-density, ''low energy'' terraced houses while retaining the school buildings as a ''common house''.

Twelve families were already involved in the project with room for another 12, group member Alex King said.

Another member, Catherine Spencer, said the 5000sq m site was chosen because it was within walking distance of the central city and had the space they needed.

Other members spoken to by The Star said people had asked them if they were involved in a cult but that was not the case.

All members would share in the design and operation of their ''neighbourhood'' but each dwelling would have its own title and people were not sharing their finances, Ms Spencer said.

The common house was for whatever the community wanted and could include laundry facilities, guest rooms, social areas or an area for teenagers, she said.

There would be an open day on Sunday at 2pm for neighbours and others to find out more.

''This is new and we want to have this open day so people know who we are. We are not a bunch of weirdos, just everyday people,'' Ms Spencer said.

She said the concept was popular in the northern hemisphere. There were more than 700 co-housing communities in Denmark alone.

''People have their own dwelling and outdoor space and then they have the common house.''

Dunedin City Council city development manager Anna Johnson said there was flexibility around planning rules when it came to developments on large sites.

She said the resource consent process did not look at how people chose to live but considered the scale of the development, whether the infrastructure could handle it and effects on neighbours.

High Street School was Dunedin's second-oldest school. It was established in 1887 and was closed in February, 2011.