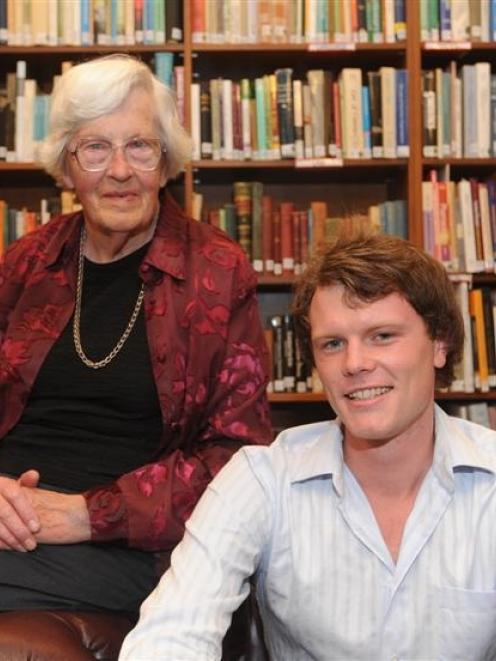 Former St Margaret's College Hall of Residence residents Ann Wylie (88) and Isaac Campbell (22) during the college's centenary gathering last night. Photo by Peter McIntosh.
One generation studied under the weight of war - the other in a time of relative peace.

Yet the pair, representing the "most experienced" and the youngest registered residents, had plenty in common to talk about last night during the college's centenary celebrations.

Prof Wylie, who was a resident from 1941-44, said there was little in the way of alcohol-induced fun during her time at the college.

"Really, we were there to study. And don't forget, it was wartime - life was grim and earnest.

"We used to have evacuation drills at least once a term to prepare for a Japanese invasion. It was really taken very seriously."

Mr Campbell, who was a resident from 2007 to 2009, said he could not imagine studying under the circumstances Prof Wylie did.

"Life is a lot more relaxed compared to Ann's day."

However, the pair acknowledged some similarities about their generations - in particular, window climbing.

Prof Wylie said the college was an all-girls hall of residence until 1981 and, in her day, there was a 10pm curfew.

"I wasn't a person who climbed in and out of windows in the middle of the night, but that kind of thing undoubtedly happened in my day."

Mr Campbell would "neither confirm nor deny" he had ever climbed in or out of windows at the college.

He said there was no curfew now, but it was hard to get "guests" in at night.

"It's a lot more difficult to do now because they have security cameras everywhere.

The pair were two of about 200 former residents who had registered for the celebrations this weekend.

A book about the history of the college was launched last night, and today residents will go on a college art tour and a garden tour, and take part in the blessing of a new Oamaru stone koru sculpture on the college grounds before attending the official reunion dinner.

Tomorrow, a special service will be held at Knox Church.