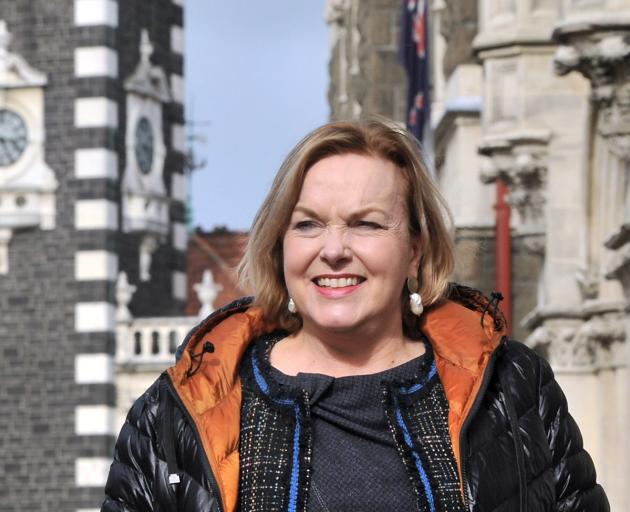 ‘‘Who would want that job?’’ she said, roaring with laughter when asked the inevitable question about her political future yesterday.

‘‘I feel the caucus is very focused on the stuff that matters and that is making sure that we are prosecuting the Government on matters of immediate importance.’’

Ms Collins and her leadership have been under extreme scrutiny in recent weeks, and the pressure was heightened this week with the publication of two polls which showed National still mired in the low 20s in the preferred party ratings.

‘‘It [leadership speculation] is so frustrating, but the big thing for me is to just keep going back to what matters for people,’’ she said.

‘‘That is the vaccination roll-out, the economy, and how we grow the economy so that we can get a health service that we really have confidence in ... people want to distract from our messaging because that way they don’t have to answer the questions about why they haven’t planned, prepared and actually executed theirs.’’

Ms Collins acknowledged some of those distractions were self-inflicted, notably when she called scientist Siouxsie Wiles a ‘‘big fat hypocrite’’ for an alleged breach of lockdown regulations.

‘‘I thought it was unfortunate, because I actually think she was a hypocrite but I was using a reference that is an old colloquialism but what I should have thought of was that somebody might be listening to this and want to make something of it, but you can’t take that stuff back.

Ms Collins has been touring the South Island this week, opting not to return home to Auckland due to it still being at Alert Level 4.

She said that on her travels she had detected some fear and some anger about Covid-19, and increasing frustration at the South Island still being at Alert Level 2.

‘‘It is very upsetting for some people, small businesses especially,’’ she said.

‘‘We only have about 32% of the eligible population who are fully vaccinated and that’s not enough, we need more than that — we have said there should be a target of 70 to 75% of people being fully vaccinated because that starts to give you options.’’

Ms Collins said no country had been able to get to 90% but New Zealand definitely needed to set some sort of vaccination target.

‘‘People are not children, people need so much more certainty than they have now ... they need to know that there is a plan for life after Covid.’’

National senior MPs have been working on a post-Covid recovery plan, which Ms Collins said was awaiting caucus sign-off before being released.

‘‘We have been waiting for one, we have yet to see one from the government, so we have been working on one,’’ she said.

‘‘We are taking it very carefully, we are trying to do it properly ... we need to have a plan where people feel safe and can see that there is a point to it and it is because we can do more with our life.’’

National would be brave to front another leader candidate with the upcoming election. As they don't have a viable contenter ready to lead, they are strong armed into playing the long and safe game. They will leave Collins to rattle a few cages along the way. Collins will be rolled after the next election while Ardern confidently serves her last Labour term basking in adoration, while the new National leader candidate emerges. In the meantime. National will be fervently looking to get a strategy in place to face the next Labour leader. They have two possible contenders for National leadership, both not currently 'battle ready,' neither would they be wise to throw their hats in the ring at the next election. Collin's destiny does not include becoming the PM. Her style won't sway a majority.

‘‘People are not children, people need so much more certainty than they have now ... they need to know that there is a plan for life after Covid.’’ ... should that not read ....life after Collins"

I suggest Ms Collins gets on the next aircraft back to the north island ... there's absolutely nothing down here that would require her "essential services".

I think we need a no-fly zone between north and south islands. The only good thing about her being here, is if we get a case of Delta in the south, we know where it came from.

As for her chances of being rolled as opposition leader ... I think that happening is pretty close to inevitable.

My opinion ... but when she called Siouxsie Wiles a ‘‘big fat hypocrite’’ ... Ms Collins anit exactly the slimmest and trimmest size 6 I've ever seen ...

I agree.We need a no-fly zone and no crossing Cook Strait except for essential workers.

Did she find time to stop by Mosgiel for her cheese roll this time. I expect it'll be cold by now. https://www.odt.co.nz/star-news/star-national/mosgiel-cafe-disappointed-...

This is why Judith you are languishing. . . read the 3rd sentence folks. who the heck does she think she is that the Nats are the nations judges to "prosecute" the govt. That would have to be the most arrogant & reckless statement she has made yet. The jury gave its verdict at the last election & all the polls in recent years Judith. Your party needs to be sent to the cells.

Time for a new right party

Well... To be fair to crusher, and God knows that is difficult, she is the leader of her majesty's loyal opposition and it is her official job to "prosecute" the govt in the highest court in the land, parliament. She's paid a ministerial equivalent salary to do it although many would argue that she has yet to earn a cent of it.
I agree with you though, a new party of the right is required and David Seymour and his merry band of one issue, conspiracy nutjobs are here and ready to serve. Notice how David carefully conceals his MP's from public view. I don't think he can trust them out on their own.

That's the problem with right wing parties, as they implode they seem to go for a race to the bottom as have the UK Tories and the US Republicans. It's like looking at a car crash.

idk why everyone keeps acting like there is no plan? there is a plan, the current one is elimination. Once we get the vaccination numbers up we will start to slowly open up again and covid will be treated the way measles is nowadays. Just because the govt isn't willing to choose a magical number doesn't mean there's no plan! We simply don't know what that number should be, especially with delta..