Colourful characters dance it up

The Duke and Duchess of Cambridge couldn't make it, but just about everyone else was there. 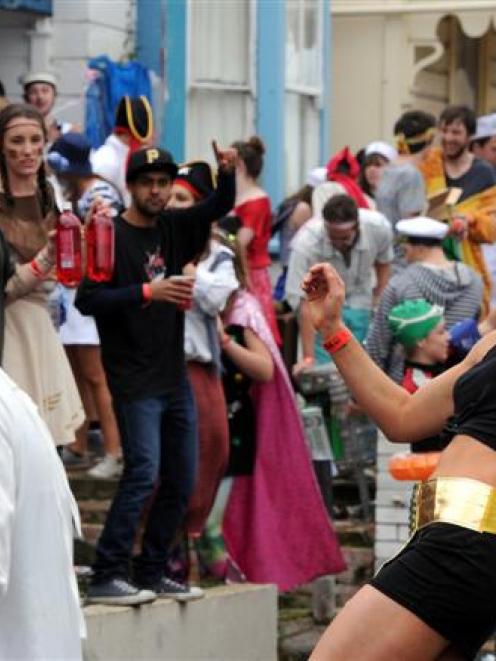 The Otago University Students Association had formally invited the royal couple to pop in ''for a drink and a dance''.

William and Kate might not have turned up, but it was a right royal occasion, as just about every colourful character imaginable danced in the street and imbibed from wine bladders and cider bottles.

The small campus street has a Jekyll-and-Hyde reputation, after previous parties were marred by arrests, building damage and a strain on emergency services.

The 3500 tickets to the notorious event sold out within two minutes of being released online on April 2.

The street party officially started at 9am. By lunchtime, half a dozen dazed and confused attendees had already been escorted, or carried, out.

But, a big, vivid safety staff and emergency staff presence ensured not too many revellers got carried away.

''We're all just here to have fun and support each other,'' Hyde St resident Deidre Richardson (21) said.

''It's not about binge-drinking. It's about everyone coming together as one and having a good time.''

The party peaked around 2pm, with the introduction of a ''one-way door'' policy.

''We want to make sure everyone is safe and that the Hyde St party goes on for decades to come.''

The music was turned off at 5.30pm. With that, uninhibited Mr Hyde began reverting back to the respectable Dr Jekyll.