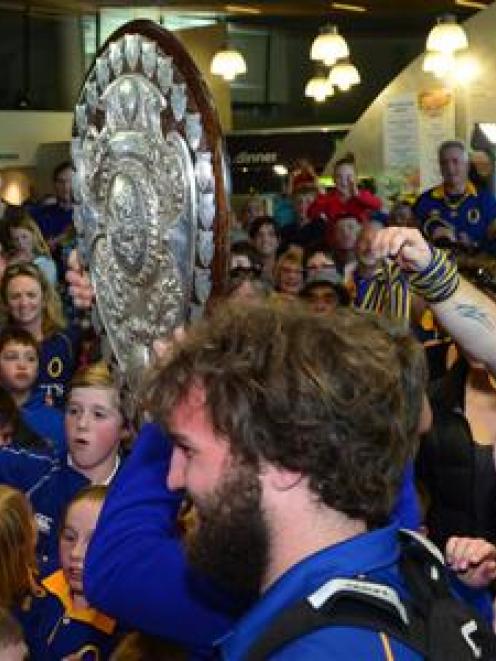 A bemused Liam Coltman looks on as the shield moves through the crowd.
There's another party at Tony Brown's place - and you're all invited again.

Brown, coach of the victorious Ranfurly Shield-winning Otago rugby team, has urged fans to show up in big numbers at Forsyth Barr Stadium on Sunday to support the blue and golds in their first defence of the time-honoured trophy.

Addressing an excited turnout of fans young and old in the Otago Daily Times Stand at the stadium yesterday, Brown thanked everyone for their tremendous support since the team's triumphant return after winning the shield in Hamilton last Friday night.

But, mindful of the stern challenge expected from old foe Hawkes Bay next Sunday, Brown asked for as many fans as possible to turn out for the match (4.35pm kick-off). Tickets for the first shield defence were on sale at the stadium yesterday, with fans being urged to ''avoid the queues'' by buying early.

For those who do not remember, the ''Party at Tony Brown's Place'' was the catchy, week-long marketing campaign used back in May 1999, when the Highlanders played the Crusaders in the Super 12 Final at Carisbrook. In those days Brown was the team's pivotal player at first five-eighth.

But, before this Sunday's initial defence, the shield is going on a lightning tour of the province - including Ranfurly.

Otago Rugby Football Union general manager Richard Kinley, amid a whirlwind ''but great'' 48 hours at the weekend, found time to organise a busy schedule for the Log o' Wood.

It will start this morning with a radio show in the Octagon before the shield returns to Forsyth Barr Stadium to be met by staff and then visit some (yet to be decided) Dunedin schools.

Tomorrow, the shield heads south to Balclutha, where it will be at the Cross Recreation Centre for several hours from noon.

On Wednesday, it will be taken inland for visits to Palmerston, Ranfurly, Alexandra and Cromwell, before heading to Roxburgh for the Otago Country rugby board meeting at night.

Starting in Wanaka on Thursday, the shield travels to Queenstown, Lawrence and then back to Dunedin, possibly stopping in at the Otago Country premier practice on the way.

On Friday, the shield will visit King's High School and Outram School before a sponsors' function in Dunedin at night. Saturday will see the shield on display in the Golden Centre most of the day.

Mr Kinley said the tour schedule was provisional and some details might change.

There were still some slots available for appearances, and it was important to the union that as many people as possible got to see the shield up close, he said.

The shield would travel with Otago players not in the training squad for Sunday's match against Hawkes Bay. Mr Kinley is expecting 15,000 to 20,000 people for that game - ''I'd be over the moon if we have that many.''

Ticket prices would stay the same but passes for the rest of the season had been reduced to $80.

A curtain-raiser of the South Island secondary schools First XV final between Otago Boys' High School and Marlborough Boys' College was expected to be finalised for Sunday too, which he hoped might attract even more people.

• The ODT is publishing a special commemorative edition on Wednesday to celebrate the historic shield win. Anyone wishing to advertise in it should contact Paul Dwyer (03) 479-3565 or Nic Dahl (03) 479-3545.