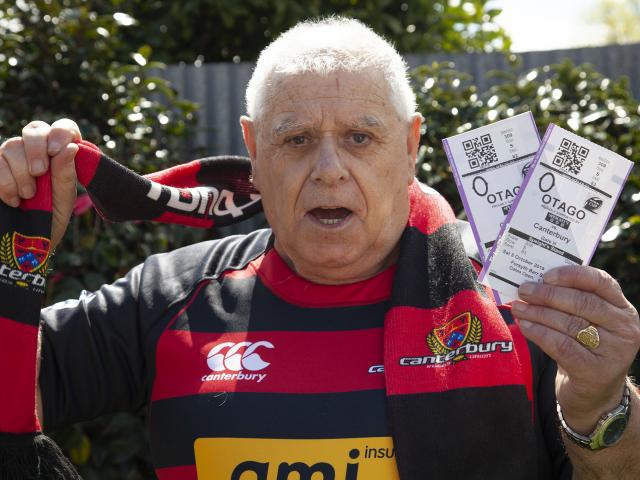 For some 13 is an unlucky number – but that’s how many times Kevin Lundon hopes to have seen Canterbury claim the Ranfurly Shield after his trip to Dunedin on Saturday.

Taranaki have pulled off one of the greatest Ranfurly Shield heists, coming from 24 points down to steal the Shield off Canterbury in astonishing circumstances.

Otago's thrashing in the Ranfurly Shield challenge against Hawkes Bay was reminiscent of a challenge from yesteryear, says ODT Online rugby writer Jeff Cheshire, as he looks at this and other key points from Sunday's game.

Otago coach Tony Brown says he was hugely disappointed with his side's start and its execution let it down yesterday.

This challenge started with a whimper and ended, frankly, in embarrassment.

The Ranfurly Shield has returned to Napier for the second time in as many seasons.

Live scoring as Otago take on Counties Manukau in a Ranfurly Shield clash in Pukekohe today.

Forsyth Barr Stadium is to be renamed for Otago's first defence of the Ranfurly Shield against Hawkes Bay on Sunday.

Oh well, what a nine days it was. Otago relinquished the Ranfurly Shield yesterday, losing to Hawkes Bay 20-19 in a titanic battle at Forsyth Barr Stadium in front of a crowd of 18,185.

There's another party at Tony Brown's place - and you're all invited again.

Heart. That is what won the Ranfurly Shield for Otago last night, coach Tony Brown said.

That was massive. All those years of hurt, that pain caused by those close losses. Well, those wounds have healed. They have been cleared.

Holding the Ranfurly Shield has given Counties-Manukau an aura.

Counties-Manukau have overcome a mental barrier of 24 unsuccessful Ranfurly Shield challenges - including two draws - to take the prized trophy for the first time in the union's 58-year existence.

This was an epic. The only problem was - and it was a major problem for Otago and its supporters - its ending was more Dead Man Walking than Chariots of Fire.

Otago - the province that is - has been in celebration mode for most of the week.

Otago has made just two changes to its side, both in the backline, as it gets ready to go into rare territory - a Ranfurly Shield defence.

Otago coach Tony Brown says he could not be prouder of his side, and no-one can take away the memories of the past nine days.