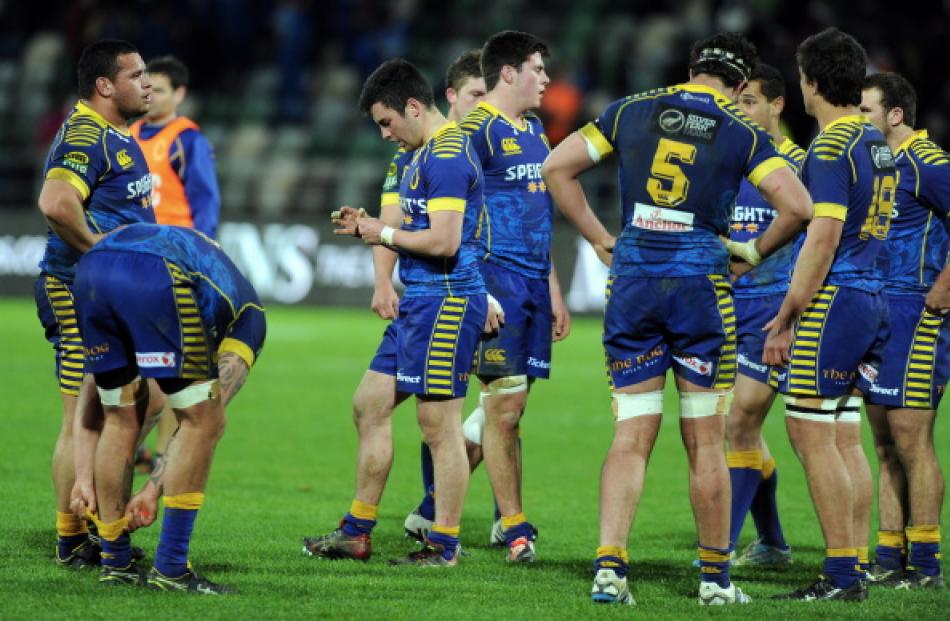 Dejected Otago players on the field following their 41-0 loss to Hawkes Bay in Napier on Sunday. (Photo by Kerry Marshall/Getty Images)

Otago's thrashing in the Ranfurly Shield challenge against Hawkes Bay was reminiscent of a challenge from yesteryear, says ODT Online rugby writer Jeff Cheshire, as he looks at this and other key points from Sunday's game.

Too narrow on defence

The initial defensive problems came from Otago trying to defend far too narrow. They looked good while Hawkes Bay tried to take it up the middle, stopping them from moving forward and not providing them with any holes. Unfortunately this was because the holes were on the outside. It did not take Hawkes Bay long to recognize this and they exploited it three times in the first eight minutes. Jayden Spence found himself marking two men in the second minute up the wing and was always up against it. Then it happened again. And again. By this time Otago were trailing 19-0 and the game was as good as over.

While being out-numbered was a large part of the problem, as the game developed missed tackles became more of a problem too. Going too high, not grabbing with the arms and simply not being committed, saw Otago fall off far too many tackles than they should have. Some of the efforts really were that poor (think the fifth Hawkes Bay try) and had little to do with the numbering issues of the first couple of tries.

Did anyone else get the feeling after a couple of minutes that this was just like an Otago Ranfurly Shield challenge of yesteryear? Everyone gets all excited in the lead up, then the team gets blown off the park in the first 20 minutes. Those thrashing generally came against strong Auckland, Canterbury and Waikato teams. This was against a Hawkes Bay team, who while strong, is not in the class of the top team in the competition and was beaten by Northland last weekend. It was not one of the Otago's more memorable performances, but at least it is over and they can move ahead to the next game.

Not much to elaborate on here, the point is pretty self-explanatory. There was no punch, no flair at all in the backline. The forward pack was on the back foot all day, which meant the Hawkes Bay defence had an easier time getting organized, but the backs did little to even try find a hole. Jayden Spence ran a nice line into a gap, but dropped the pass, while James Lentjes did similar before having his pass dropped. Other than this, it was pretty uninspiring. The set-moves that were so good in the first two games have gone missing, or are not looking polished when they are used. At this level you cannot rely on players missing tackles, you have to make it harder for them and Otago did not do this.

Again there is not much to say. There were not enough players committing to the breakdown and they were too slow getting there. Hawkes Bay attacked this area aggressively, turning over ball and pushing Otago off it when not enough people committed. If you are going to win games of rugby, you have to retain your own ball and this was a real issue that stopped Otago applying pressure for a length of time.