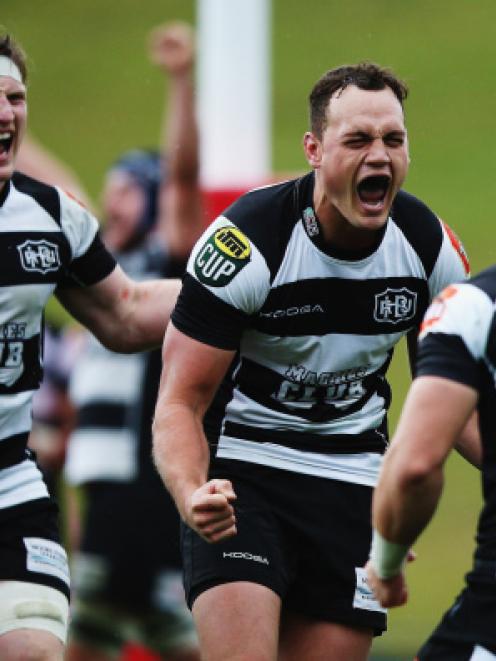 Israel Dagg (C) celebrates with Hawke's Bay teamates Ihaia West (R) and Brendon O'Connor after beating Counties Manukau to claim the Ranfurly Shield. (Photo by Hannah Peters/Getty Images)
The Ranfurly Shield has returned to Napier for the second time in as many seasons.

Counties Manukau enjoyed their six-game, 12-month tenure, but lost 27-21 to a superior, hungry Hawke's Bay outfit before a crowd of around 6500 in Pukekohe, though not without a rousing late comeback.

This was the fourth occasion this season that a Championship side had beaten a Premiership opponent, but the Magpies would not have cared a jot for that stat.

The high balls rained down and there were no less than three tries from lineout drives, while the Steelers tried unsuccessfully to fashion a winning one from their final lineout.

The match exploded in the opening minute when dangerous Magpies left wing Ryan Togia appeared to score in the left corner, only for the TMO to rule that he did not exert sufficient control of the ball. Lock Mark Abbott should have scored but was divested of the ball soon afterwards.

Undeterred, the visitors made it count when captain Brendon O'Connor dived over off a lineout drive that looked all too easy, this after Ahsee Tuala had opened the scoring with a penalty goal. Incredibly, less than 10 minutes later, O'Connor was over in identical fashion for his double.

Fullback Israel Dagg ran freely and involved himself at every opportunity in his first Magpies outing in three years, though he was guilty of perhaps trying too hard.

The Steelers couldn't get their flow going, nor any lineout drives to rival Hawke's Bay, not helped by some wayward lineout throwing by Suliasi Taufalele. Their game was unravelling through myriad unforced errors and their passing was too static in the backs. Alarm bells sounded when, from a backpedalling scrum, Magpies No 8 broke and fed halfback Chris Eaton for the try.

But the unthinkable happened when the Steelers scored off a lineout drive of their own via flanker Onosa'i Auva'a. At 16-20, they were back in it... somehow. When Augustine Pulu scored a try lying on his back after a dab, they regained the lead.

It was Togia, though, who hammered the first nail in, scoring a smart try, for the bonus point, with just over 10 minutes to run. The Magpies fans dared to pray.

A big week awaits Hawke's Bay and its rugby community, with McLean Park hosting the All Blacks-Pumas on Saturday. The Magpies travel to Northland on Friday night, and will have their first defence on Sunday September 14 against Otago, the team from whom it won the Shield in 2013. Counties Manukau will take on the Manawatu Turbos in Palmerston North next Sunday.