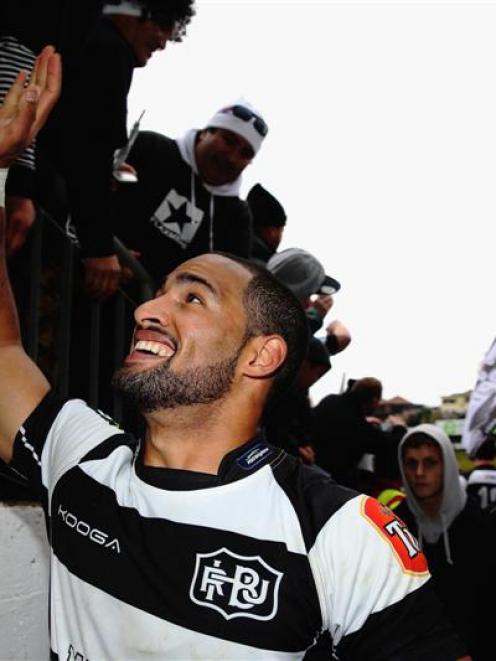 Hawkes Bay's Ryan Tongia. Photo by Getty.
This challenge started with a whimper and ended, frankly, in embarrassment.

Hawkes Bay ran out a 41-0 winner over Otago in Napier yesterday, in a Ranfurly Shield challenge, after leading 31-0 at the break. Otago offered a meek effort and failed to show any accuracy or be competitive.

An electric start by Hawkes Bay had Otago's challenge over before it had started. Playing into the wind, the home side scored three quick tries inside eight minutes and Otago was down and out, and it spent the rest of the game trying to limit the damage.

Hawkes Bay scored five tries in the first half, despite having to face the strong breeze, and took the pedal off the gas in the second half. But it was still light years ahead of Otago.

Otago was poor in all departments. It lacked pace in the backs, missed too many tackles and any chance which came along quickly went up in smoke, thanks to a sloppy error by a man in blue and gold.

The visiting side had no territory in the second half and showed some spirited defence but it was toothless with the ball in hand.

It was Otago's third game in 11 days and it showed, as its energy levels were similar to those seen on a Friday night at a rest-home.

Hawkes Bay played its best game of the season but that was no excuse for Otago, which failed to front with any accuracy and never found any cohesion in attack or defence.

He broke tackles, secured turnovers and was just one of the many Hawkes Bay players who were more than a step ahead of his Otago opposite.

Otago's game was summed up right at the end when flanker James Lentjes made what seemed like the only line break of the game for Otago. He passed the ball on to Tei Walden but with the tryline right in front of him, the second five-eighth somehow dropped the ball.

That was the way Otago played the game - too many errors when it mattered and if many of these players are eyeing up contracts at the next level, in the words of one dinkum Australian: ''They're dreaming''.

The first try for the home side took less than two minutes.

Otago missed a tackle down the sideline and winger Shannon Chase broke. He linked with winger Ryan Tongia who outpaced the defence.

Tongia was in again shortly afterwards, running on to a deft kick from Highlanders back Richard Buckman.

As soon as the crowd sat down it was up again, as captain and openside flanker Brendon O'Connor got on the end of some nice breaks by the Hawkes Bay backs to score for the Magpies.

Otago then stemmed the damage for just under 20 minutes, before Evans bumped off a couple of ineffective tackles to put Chase away and the speedy winger did the rest.

Buckman helped himself to the final try of the half, beating a couple of poor Otago tackles and running 50m to score.

The second half rather drifted along and Hawkes Bay squandered a couple of certain tries.

It had to wait until near the end to score again, when replacement prop Jason Long barged over.

Lock Tom Franklin stood tall for Otago while hooker Liam Coltman never gave up, but plenty of deficiencies were laid bare and it will take more than a Band-Aid to fix them.