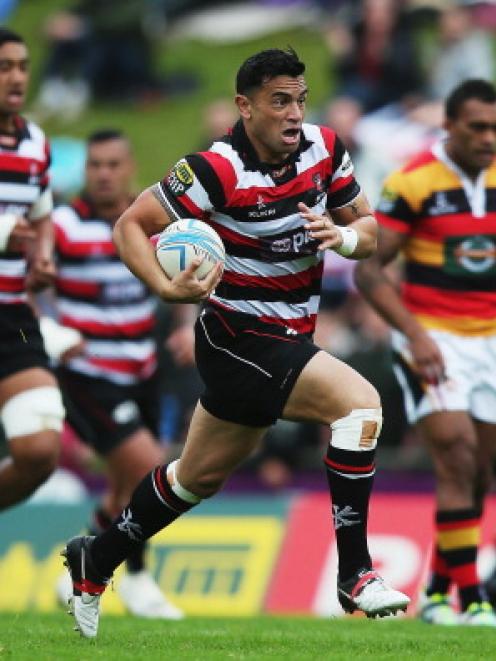 Sherwin Stowers in action for Counties against Waikato in Pukekohe today. Photo Getty Images
Holding the Ranfurly Shield has given Counties-Manukau an aura.

A dogged display, especially as the teams struck second half fatigue, showed the holders' hardened edge as they beat Waikato 37-25.

They had lost their last eight matches to Waikato and the last time they had beaten them in a championship match was 2000.

The win pushes Counties to 20 points on the premiership table and keeps them in the top four. The tri-coloured supporter jerseys and scarves are growing exponentially by the week, as are the joyoud roars reverberating around the Ecolight Stadium amphitheatre.

The prospect of the Shield going full circle and returning to Waikato four weeks later looked possible throughout. Waikato were primed but met the requisite resistance from their Bombay Hills neighbours.

Counties played the percentages well, particularly against the wind in the second half, where the ball was channelled down field to maintain a territorial advantage.

A series of solid tackles towards the end in their own 10-metre line further underlined the resolve.

The key moment of relief arrived in the 76th minute when Waikato went close down the left flank but had the movement rumbled only for a player to put a boot to it and release the pressure valve with their 12-point lead under threat.

Counties' support play remains their prime asset. The backline linkages, reinforced by the loose forwards, were a treat. Bundee Aki and Rey Lee-Lo deserved credit for their straight running.

Fullback Sherwin Stowers and halfback Augustine Pulu were also rewarded with tries when displaying the same skill. Baden Kerr reinforced their efforts with able tactical and place-kicking. He was not daunted by the distraction of a cowbell cacophony. Conversely, it seemed to give him rhythm. No 8 and captain Fritz Lee led by example for the most part.

He was in the thick of the action and benefited with a try from a Kerr break when he stuck to his shoulder. If there was a criticism of the Counties aggression, it was perhaps pushing the odd extra pass which led to errors. Lee's fingertipping of a ball from a Waikato punt which went out in the in-goal also ramped up the pressure.

Waikato presented threats through shuddering tackling from blindside flanker Rory Grice who scored a try in his blazer game. Sam Christie offered solid option-taking at first-five including the offload in the tackle which gave Trent Renata space on the right flank to score the opening try. Christie, on his return to the Waikato line-up, also scored. Brad Weber produced another slick passing performance at halfback.