Otago, you have done us proud 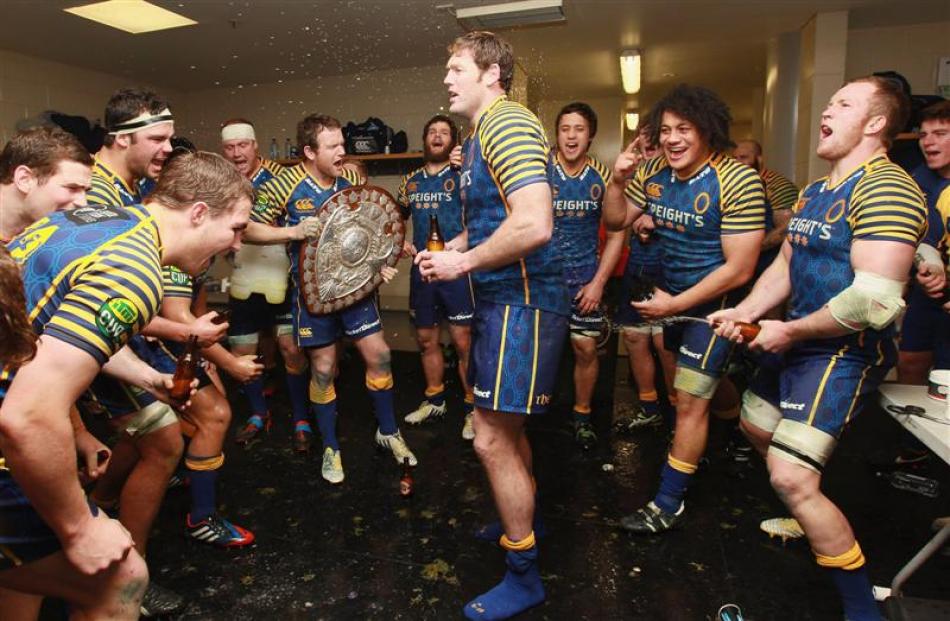 Lock Tom Donnelly is sprayed with bubbly by his team-mates inside the Otago dressing room. Photo by Getty.

That was massive. All those years of hurt, that pain caused by those close losses. Well, those wounds have healed. They have been cleared.

Thanks Otago. Last night, you made plenty of people happy.

Otago won its Ranfurly Shield challenge, beating Waikato 26-19 in Hamilton, based on some steel in defence, accurate goalkicking from Hayden Parker and some great courage.

The team went out to a 10-point lead in the first half, then got caught but managed to score the key try in the final quarter of the match, which in the end was the difference.

Otago captain Paul Grant, whose grandfather, Cliff Bisset, played in the first Otago side to win the shield in 1935, said the achievement had not yet sunk in.

''You can see the excitement in the changing room, the way the guys stuck together out there and never gave an inch,'' he said.

''We just stuck to our basics and knew we just had to keep making our tackles and sticking with our defence.

''This is unreal. Most days just pass you by as a rugby player but this one I will always remember.''

Otago scored the decisive try with 23 minutes gone in the second half, and in the end that was the difference between the two teams.

It managed to force Waikato back over its tryline and from the resulting 5m scrum, Grant broke off the back. When he was lowered, the ball came free and replacement loose forward TJ Ioane picked it up and, like the raging bull he resembles, he charged over and scored the try.

That gave the side a seven-point lead and, come hell or high water, nothing was going to come between this Otago side and the shield.

At the end, Waikato pressed and had a monopoly of ball in the final 10 minutes, but the Otago defence held.

Hayden Parker was the key man for Otago, scoring 21 points and running the cutter with aplomb for the side.

He said he tried to not get too excited during the match.

''I just tried to treat it like any game. Just line the ball up with the posts and concentrate on putting the ball between the posts,'' Parker said.

''Just in the final 10 minutes I thought if we could get field position and keep them in their own half then it would be hard for them to run 80m and score a try.''

Parker shared the elation in the Otago changing room afterwards.

''I'm absolutely rapt. Just seeing the way the boys are now and playing a game like that, it brings a whole lot of feelings together.''

Otago looked dangerous when it had the ball in the first half and had a 10-point lead after half an hour.

Parker slotted two penalties within 15 minutes and then scored the first try of the game.

Gareth Evans, who again stood out, won a turnover, one of many by the loose forward, and the ball was shifted upfield.

It came to Parker and he put in a nice cross kick into the arms of winger Kieran Moffat. Moffat looked for support and it ended in the hands of Parker, who burrowed over the line to score.

He slotted the conversion from out wide and added a penalty five minutes later to give Otago a handy lead.

Waikato needed a spark and it got it with less than five minutes to go in the first half.

Big centre Save Tokula sliced through the defence and drew the last man to put Tim Mikkelson over.

Right on the stroke of halftime, Waikato was in again with Tokula making another massive break. He passed to Renata, who went over, but the last pass was ruled forward by the third match official, Aaron Paterson, and the try was ruled out.

That was a big call, but a correct one.