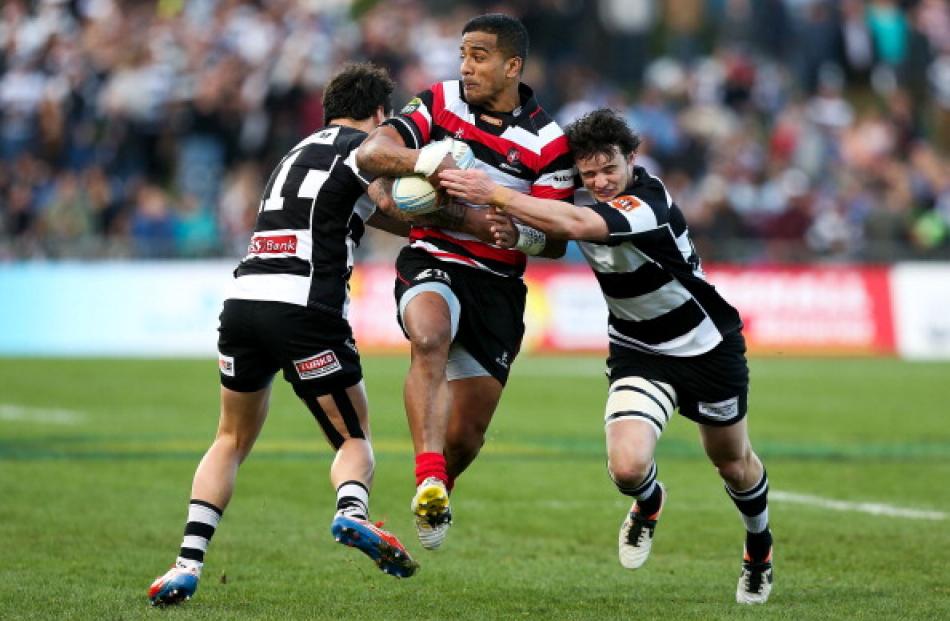 Rey Lee-Lo of Counties Manukau is tackled by Richard Buckman (R) and Zac Guildford of Hawkes Bay during their Ranfurly Shield match at McLean Park in Napier. Photo Getty Images

Counties-Manukau have overcome a mental barrier of 24 unsuccessful Ranfurly Shield challenges - including two draws - to take the prized trophy for the first time in the union's 58-year existence.

Hawkes Bay were defending for the first time in 44 years after taking it from Otago the previous week but could not hold off the spirit of the Tana Umaga-coached side. It is the first time Umaga has helped take the Shield too.

The 27-24 result came after dramatic final moments when a false hooter saw Counties replacement halfback Kane Hancy kick for touch. The kick was charged down, giving the Bay a last respite as their six-day reign neared an end. Moments late it had, after Counties scrambled to recover.

The country has been treated to a riveting 15 days of Shield rugby with Waikato, Otago, Hawkes Bay and now Counties-Manukau holding the log o' wood. It's as good as Lord Ranfurly could have hoped for when he commissioned the carved trophy which had its first challenge in 1904.

The lead tic-tacked numerous times as both teams used their expansive skills. Counties were rewarded with a try to Sikeli Nabou in the 75th minute which turned the match as Adam Bradey and Brendon O'Connor failed to pull him down.

Earlier two plays between the 53rd and 58th minutes looked crucial to the result when the holders pushed ahead 21-17.

No 8 Mark Atkins had one of Hawkes Bay's stronger games and was rewarded with a try minute when he slipped past Baden Kerr. Kerr was a strategic influence for the challengers at first-five and they would have been grateful for his presence after he recovered from a haematoma to his left leg. Just not at that moment. Atkins sprinted 20m to the line.

Five minutes later, Counties-Manukau captain Fritz Lee had the option to take a penalty goal to the right of the posts when Hawkes Bay led 21-17. He opted for the scrum and the subsequent pass from Augustine Pulu wasn't accurate enough pushing down the blindside. The challenge looked in doubt.

The opening half was relatively fluid, both teams getting their share of possession and utilising potent outside backs. Counties scored the first try through Sherwin Stowers down the left flank, after some sparkling footwork from Augustine Pulu. Gillies Kaka responded after flicking a ball inside on the 40m mark; he backed up and cantered across.

The goal kickers Kerr and Ihaia West cancelled each other out with the sort of accurate penalty shots that make teams think twice about infringing anywhere in their own half.