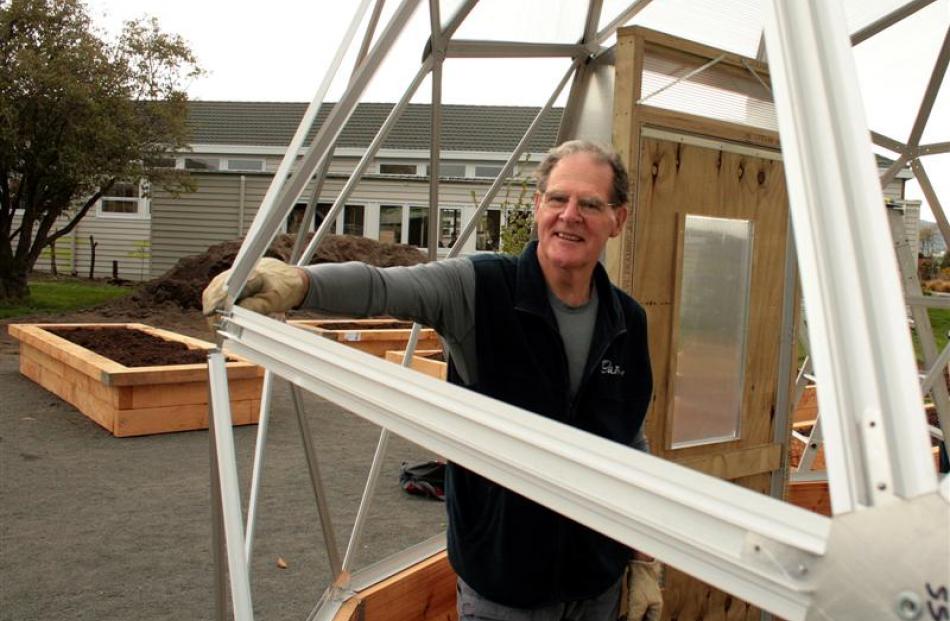 Jeff Copson helps build a bio-dome he designed for the South Dunedin Community Garden. His son Graham is the garden's project manager. Photo by Dan Hutchison.

Plant one idea, pile on a mountain of manure, add a ''snowball of enthusiasm'' and Dunedin's latest community garden is born.

The Bathgate Park School Community Garden will open on Saturday after 14 months of planning and building.

Project manager Graham Copson said he was looking forward to getting into his own back yard after spending almost all his spare time over the last year developing the garden.

Now that a lot of the hard work has been done - building raised beds, landscaping and a large bio-dome (glasshouse) - it was time for others to get gardening, Mr Copson said.

Anyone will be able to contribute to the final design of the garden, get involved in the fortnightly ''social gardening'' sessions and share in the food produced.

Mr Copson said there had been a snowball effect of enthusiasm as the project progressed, including a generous contribution of 50 cubic metres of horse manure from a local stables, amassed over 30 years.

The open day is from 10am to noon on Saturday at the rear of Bathgate School in Macandrew Rd.

Community gardens are springing up like wildfire in Dunedin, so much so, that two organisations have been set up to nurture some mutual benefits.

GrowSouth's aim is to increase the number of community gardens in Dunedin. Spokesman Graham Copson said it wanted to provide support and develop a pool of resources for schools and others with a similar idea.

Another group called the Local Food Network aimed to bring all the community gardens closer together.

A member of that group, Jon Foote, said there were a lot of community and school gardens in Dunedin but they were not very well connected.

A website would be set up and events held to link the groups.

• The Star wants to know more about your city's community gardens. Contact star@thestar.co.nz.