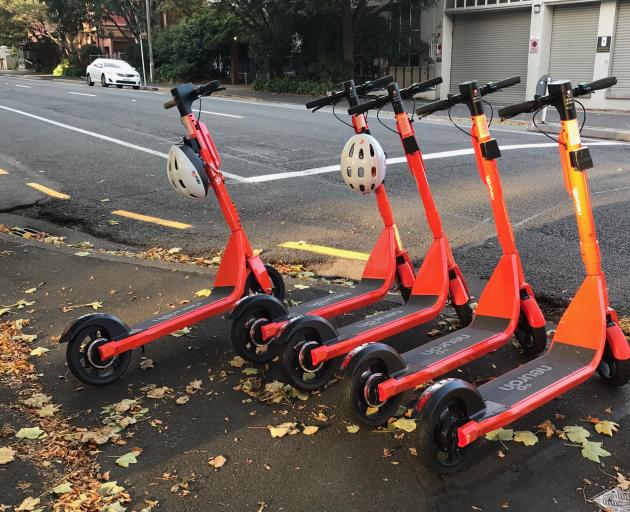 Only two of this row of five Neuron scooters, parked near the Otago Museum recently, still have helmets. PHOTO: SUPPLIED
The extra safety of using helmets when riding e-scooters could be undermined by light-fingered, or indifferent, riders.

Launched in February, the Dunedin fleet of 250 Neuron e-scooters feature large wheels and a wide deck, voice-operated safety features and, most importantly, helmets.

The use of helmets for safety was "strongly recommended" at the time by Neuron Mobility New Zealand regional manager Adam Muirson.

However, an observant reader of The Star recently noticed that ranks of parked orange Neuron scooters around the city have been lacking helmets.

Late last month, an informal count in North East Valley revealed that, of 26 idle scooters, only eight had helmets.

"This is quite a concern, in terms of the safety of riders of these scooters," the reader said.

"But also, one wonders where have all the helmets gone?"

In response to The Star request for comment, a Neuron Mobility spokeswoman said, "although helmets are not mandatory in New Zealand they are the single most important piece of safety equipment and we believe every rider should wear one to protect themselves".

When it comes to helmets, all Neuron e-scooters featured an app-controlled Helmet Lock, which secured a safety helmet to every e-scooter, electronically releasing it to use at the start of the booking.

Riders must then replace the helmet into the helmet lock at the end of their trip.

"This is a great feature not only for safety, but also to reduce the number of discarded helmets which we know can be an irritation in cities," the spokeswoman said.

Helmets that were damaged or mislaid were replaced as soon as possible by the Neuron ground operations team.

Where users willfully removed helmets they could be charged or banned from the service.

To encourage the use of helmets, users were given credits for their next ride if they took a "helmet selfie" while wearing a helmet.

"The vast majority of riders are behaving responsibly and the feedback has been extremely positive."

I've been counting the number of users who wear helmets that I've seen on a Neuron. So far I've counted 8 users without helmets, none with.

Pity there is not more concern for the safety of footpath users.