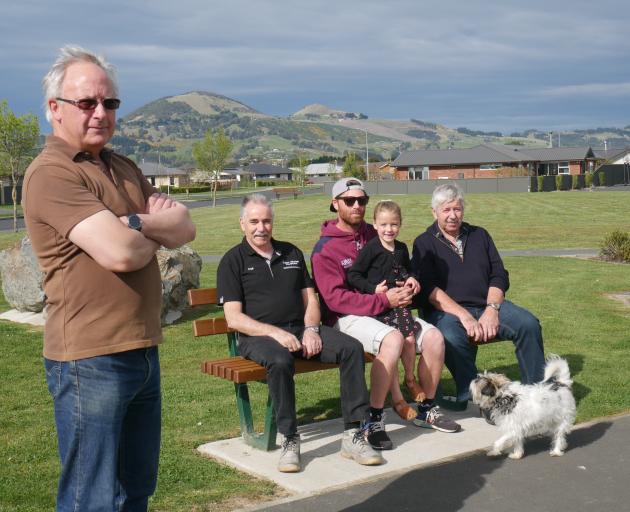 Silver Springs residents (from left) Michael Reece, Fred Donaldson, Hamish and Poppy (5) Carey, and Terry Wells (with Rosie the dog), want to see more play equipment and plants in the reserve. PHOTO: JESSICA WILSON
A group of Mosgiel neighbours wants the reserve in their neighbourhood looked after.

Michael Reece, of Mosgiel, spoke in the public forum of the Mosgiel-Taieri Community Board to ask for the board’s help in setting up a group in the Silver Springs subdivision.

The group would assist the Dunedin City Council to develop and maintain the reserve as an ongoing co-operative community group, Mr Reece said.

Plants and trees in the reserve were either dead or dying, the ground was "hard-packed gravelly dirt" and there was only one rubbish bin in the subdivision, he said.

Many of the remaining trees were "ring-barked" by line trimmers.

Mr Reece and his neighbours thought the reserve would make a good place for play equipment, as there were many families with young children in the area and the closest playground was more than 1km away.

Children rode their bikes and played on the reserve, "but it could be so much better".

Mr Reece was concerned that due to its rate of decline, within the next decade the reserve would become a mown paddock mainly suitable for off-road parking.

"And, in fact, it’s actually being used as parking from time to time now," he said.

He had been in contact with council staff since June 2019.

Mr Reece had contacted his neighbours, many of whom were keen to be a part of the group.

The group would be self-funded.

"All we need is the right contact at council and to be pointed in the right direction, as, so far, I keep being told council has no system in place for co-ordinating with this type of community group."

Board deputy chairman Dean McAlwee said he recently had a similar complaint from one of Mr Reece’s neighbours, who sent photos of the trees to a council staff member and asked for a copy of the landscape plan.

Mr McAlwee was told by the staff member that the majority of the subdivision is vested with the council and no landscape plan was required for the subdivision’s resource consent, however, it may be part of a transport plan.

Mr McAlwee’s email was forwarded to the transport team, he said.