By Molly Houseman
0 Comments
The sound of Beethoven filled Dunedin’s Octagon yesterday, during a musical protest.

Hundreds of artists and music lovers took to the streets in a rally to show support for Radio New Zealand (RNZ) Concert FM and its presenters.

This followed the decision by RNZ to remove the classical station from the FM band and replace it with an automated station, being reversed this month.

Deputy mayor Christine Garey attended the protest and said although the decision was a step in the right direction, it should not be confused with the fight being won. 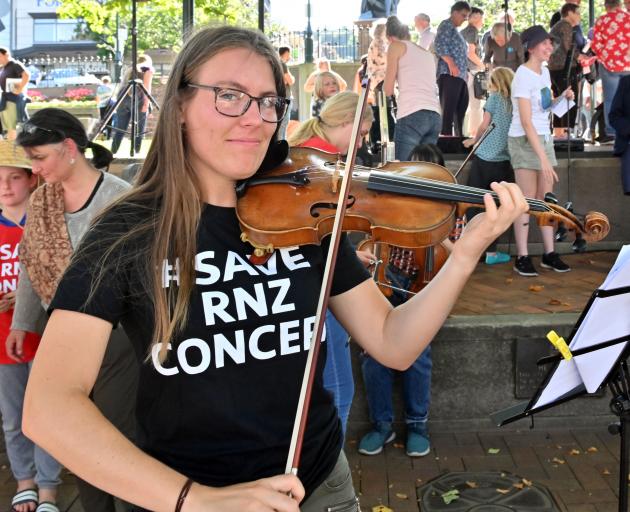 "Staff redundancy is still on hold."

The RNZ Concert team had been given until the end of next month to create a plan to increase listeners.

She said removing the announcers would remove the intellectual force.

"They are the curators of the programme and pivotal to quality."

University of Otago head of performing arts and composer Prof Anthony Ritchie agreed that it was not the end of the struggle.

He also said there was an assumption that classical music was "elitist’,’ but it was for people across all ages and sectors.

"It is not only for old, white people in cardigans."

"It is also about saying thank you and showing that this station really matters."

She said the orchestra, which performed at the rally, was a collaboration of the Dunedin classical music community.