Constant headphone use cause of child hearing loss 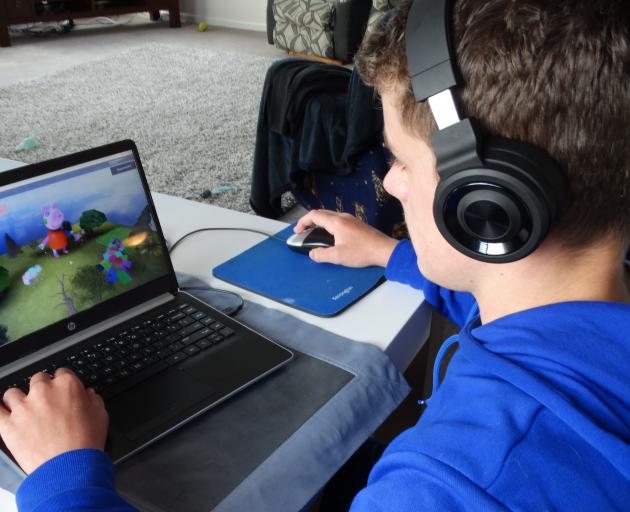 Dunedin teenager Jordan Spiers (13) demonstrates game­play while wearing headphones. Hearing Support Otago is targeting hearing loss through headphone-use among young people this month. PHOTO: BRENDA HARWOOD
Constant use of headphones among children and young people is leading to a ‘‘silent and growing epidemic’’ of hearing loss.

That’s the message from Hearing Support Otago president Olwyn Grey, who says children as young as 8 years old are suffering hearing loss due to headphone and earbud use.

‘‘Children are wearing them for hours every day, while they play games, listen to music, or use various devices, and it’s doing damage,’’ Mrs Grey said.

Hearing New Zealand surveys have shown that young people often run headphones and earbuds at 100 decibels — the equivalent of using power tools, which can causing hearing damage in 15 minutes.

About 15% of teenagers already have hearing loss, most of which starts with tinnitus due to damage to the sensory apparatus inside the ear, the surveys show.

‘‘If young people come home from a concert and their ears are ringing, that is the start of damage occurring,’’ Mrs Grey said.

‘‘None of our sensory stuff regenerates, and unfortunately kids don’t understand that.’’

‘‘Make listening safe’’ is the theme of Hearing Awareness Week, running nationwide from March 1 to 7, which will aim to raise awareness among young people.

‘‘With so many young people already experiencing noise­induced hearing loss, we really need to talk to them about how to limit the dangers and protect their hearing in the noisy world we live in.’’

Safe listening will be a hot topic at a ‘‘Silent Breakfast’’ to be held on Monday, March 2, from 8am to 9am, at Nichol’s Garden Cafe, to which Dunedin high school pupils are invited.

The fundraising event is open to the public.

‘‘We are going to put earmuffs on people for about five minutes to simulate deafness, and let them have a go at having a conversation,’’ Mrs Grey said.

‘‘It is so important that they get the message, because it is so hard in a hearing world when you lose your hearing.’’

Loud noise was a fact of life for everyone, and it was often not until people reached the age of about 50 that they realised they were struggling.

‘‘We would like people to be passionate about protecting their hearing.’’

Hearing Support Otago is one of 23 sister charity associations spread throughout New Zealand.

Its mission is to improve the quality of life for people with hearing loss and their families.