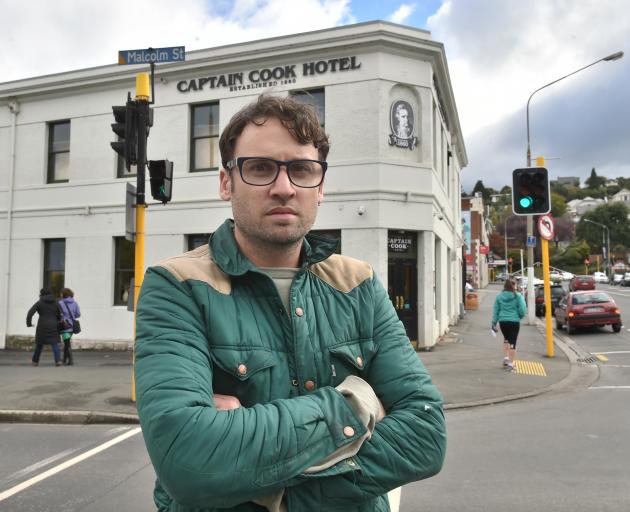 Dive music venue owner Mike McLeod. PHOTO: GREGOR RICHARDSON
It will always have a place in Dunedin’s cultural history, but The Cook is The Cook no more.

Mike McLeod, operator of the venerated music venue, confirmed he has changed its name in the wake of a global backlash against systemic racism and white privilege.

Mr McLeod once fought to keep the name of the venue, situated upstairs at the Captain Cook Hotel.

But as public statues around the world are being vandalised or removed as a protest against systematic racism, the venue is entering a new era.

‘‘I’ve had the conversation before,’’ Mr McLeod said. ‘‘I’ve definitely thought about it before, before these things came up.

"And my only real [consideration] was like The Cook has been a music venue in Dunedin that was probably more famous in the ‘70s and ‘80s in a time when Dunedin music - the Dunedin sound - was quite an important cultural thing.

"If you talk to people about the Dunedin sound and the Flying Nun bands, The Cook was a venue that gets mentioned as one of the classic venues to play at.

"And I hadn’t really thought about the colonial association. I always just thought about it in that sort of continuation of the cultural lineage of what that place was.’’

On Tuesday, Mr McLeod was unsure what the venue would be called, but this afternoon the Facebook page was updated to Dive - Music Venue.

It posted a 2010 Playboy Magazine definition of a dive-bar, a favourite type of bar for Mr McLeod when he visits the United States.

‘‘A church for down-and-outers and those who romanticise them, a rare place where high and low rub elbows - bums and poets, thieves and slumming celebrities. It’s a place that wears its history proudly.’’

Dive will host its first show under its new name this weekend.

‘‘I’ve had the conversation before,’’ Mr McLeod said. ‘‘I’ve definitely thought about it before, before these things came up".
I'm sorry... I simply do not believe you. It's more likely you have jumped on the bandwagon to promote your venue.
In fact, I'm sure that very few New Zealanders have ever thought of Captain Cook being anything other than the discoverer of this country.

While I'm not in favour of Cook's endeavors being forgotten (you see what I did there?) I think, as we're sticking to facts, Kupe takes the title for discovering this country. And, although Cook was a brilliant explorer in his own right, Abel Tasman's journey and reports helped point him in the right direction.

Very funny!....
How about we say James Cook was the first to define the NZ coastline, for Europeans?

According to authentic South Island traditions, Rakaihautu arrived in New Zealand a long time before Kupe. The whakapapa shows this.

Captain Cook's voyages were scientific expeditions. The Colony of New Zealand, for better or worse, came much later. To blame Cook for any of the "worse" is like blaming Julius Caesar for any later crimes of Italians.

“The Dive” how regressive. A dive bar does indeed conjure images of salubrious encounters and lurid self-indulgences. Fitting activities for recidivist drinkers and the sleaze emporia manifest in the culture of vintage dirty Dunedin drinking, as I heard it once referred to. The name Captain Cook at least suggests a man of standing, in uniform, astute, proud of his achievements, a commander of men. Whereas, The Dive hints at smelly gym shoe, ratty trench coats, insularity and faded glory.

And did Mr McLeod talk with Iwi as he indicated earlier on this week? What was their reaction?. The name change is about not getting boycotted by students and avoiding potential protests in wake of the George death. In other words keeping them spending MONEY in his venue .Its not about some angst over what Cook may or may not have done. Cook was a product of his country and its thinking at that time.

Sycophant to a cause célèbre. Oh, how woke.

I see the first dive bar was reputed to be Dug's Dive in Buffalo, New York, set up by William Douglas, a former slave from Tennessee in the 1830s. Is the new name possibly a form of cultural appropriation from a victim of slavery?

"The Cook is The Cook no more."
The Cook will always be The Cook.
Fake statement, headline and news.
What McLeod wants to call his dance venue is up to him.
Dive, does sound about right.