National Corvette Convention organisers Brett Ashton (left) and Gregory Scott at Sunnyvale yesterday, where an unofficial gathering of 52 Corvettes from around New Zealand was held. PHOTOS: LINDA ROBERTSON
The thing about Corvettes is, once you put your foot on the gas, they are very hard to stop.

It was the same with the National Corvette Convention in Dunedin at the weekend.

Officially, it was cancelled last week because of the change in Covid alert levels, but more than half of the Corvette owners coming to the rally from around the country were already within skidding distance of Dunedin when the cancellation was made.

"Some of them had long since left home," co-organiser Brett Ashton said. 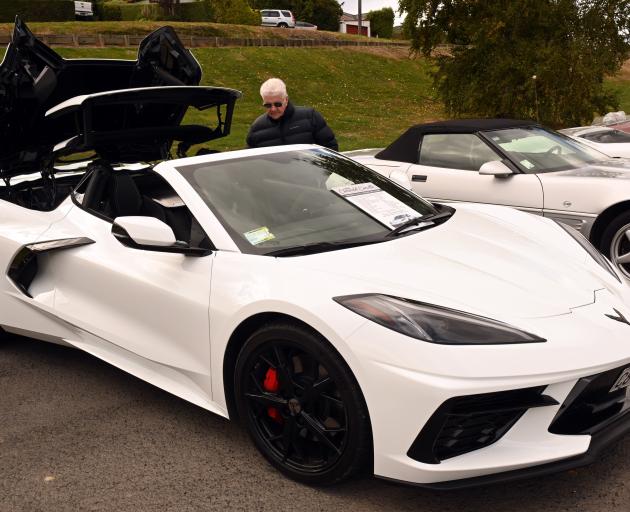 Graeme McDougall, of Dunedin, admires a 2020 Chevrolet Corvette Stingray C8 2Lt convertible coupe owned by Paul and Pat Ekdahl.
"One owner said he was already on the ferry and was one hour away from Picton.

"Others said they were doing it as part of a holiday."

He said the decision to cancel was not taken lightly.

The committee considered changing the date, but the logistics of a date change versus all the schedules versus the availability of venues and some of the services, made it rapidly apparent it would be almost impossible.

Yesterday a rally was held for the 52 visiting Corvettes and their owners, starting at Sunnyvale.
So he decided to have an unofficial gathering instead.

Members had a few impromptu dinners around Dunedin on Saturday, and yesterday a rally was held for the 52 visiting Corvettes and their owners.

Mr Ashton said the rally started with a roar at Sunnyvale, travelled south to Waihola (via Henley), across to Taieri Mouth, and back to Sunnyvale via Brighton and Green Island.