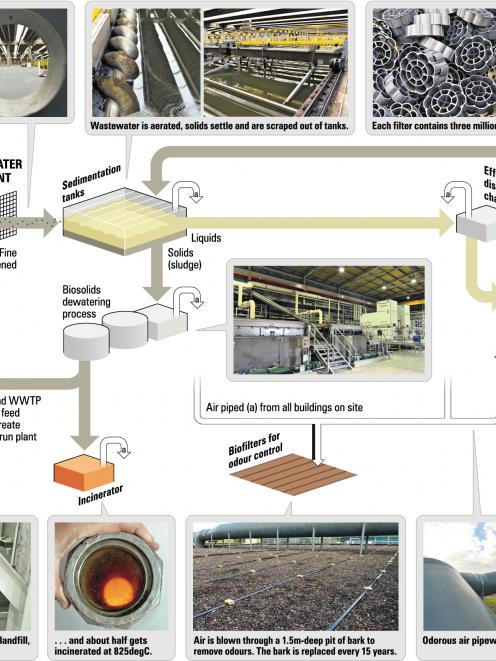 <a href="http://www.odt.co.nz/files/story/2013/07/cost_of_doing_business_money_we... target="_blank">Click to see full-size graphic</a>
Dunedin ratepayers have paid more than $200 million over the past 20 years to upgrade the city's sewage treatment systems. Reporter Debbie Porteous takes a look at what is behind the drainage levy on your rates bill.

Dunedin has a coastline of 60-odd kilometres within its boundaries.

It is part of what makes the city attractive and is highly valued for its beauty and wildlife, and for recreation.

Pumping semi-treated sewage straight into the sea is not ideal, and that is why Dunedin city came up with a plan 20 years ago to overhaul its wastewater treatment system.

And $200 million later, the city now has its upgraded system.

It produces clear, largely bacteria-free water that is pumped out to sea, and solid waste that is either recycled to produce electricity to run the Green Island wastewater treatment plant, dumped in a landfill, or incinerated.

Work remains to be done on re-using the solid waste but the aim is to eventually use more of it for energy production, producing savings that should regain some of the cost of the upgrade project.

Tahuna upgrade project manager Brian Turner said the sewage treatment system in particular was specifically tailored for Dunedin and used the best technology available to do what the community wanted and needed it to do.

The processed water that was pumped out to sea any normal day was now more than 90% free of solids, he said.

Before the upgrade, which removes finer solids, that figure was only 60%.

Previously, the discharged water also contained chlorine, which had been used as a disinfectant.

As council infrastructure services committee chairman Cr Andrew Noone said at the official opening of the upgraded Tahuna wastewater treatment plant late last month, the days of sewage washing up on Dunedin's beaches were over.

Upgrading Tahuna was the final step of the council's wastewater upgrade strategy adopted in 1991-92.

The plan, developed in consultation with groups including industry, iwi, property owners, schools, environmental groups, government and council representatives, was to stop all discharges of sewage directly into the ocean around Dunedin.

Dunedin's sewage had been discharged into the harbour since the city was settled. In the 1950s, the city started treating it before discharge. Under the plan, most of the city's wastewater - several of the city's eight water treatment systems are in smaller rural communities that have their own oxidation schemes - would be diverted to two main treatment plants at Green Island and Tahuna. As a result, smaller treatment plants around the harbour would be decommissioned and sewage diverted to those main plants.

By 2000, wastewater from the central city was no longer being discharged into the harbour. Mosgiel's wastewater also no longer goes into the Taieri River.

Treatment plants have been upgraded, with improvements including new ocean outfalls, buildings, screens and electricity generators and the installation of modern treatment techniques and kilometres of new pipes.

The biggest investment was at Tahuna, where $110 million has been spent since 2006 adding a 1.1km outfall pipe into the ocean and a high-level waste screening and ultraviolet and odour-treatment system.

That was preceded by a $20 million upgrade to the Green Island wastewater treatment plant, which had its outfall pipe extended by 350m to 850m, and secondary and UV disinfection treatment added.

Tahuna was the last stage of the strategy and Dunedin Mayor Dave Cull said its completion marked the end of a long road of continuous and costly improvement.

The investment by ratepayers was significant, but it was needed because the way the city was polluting its marine environment was not acceptable to the community or other councils.

Mr Turner had been in charge of the whole project, from the early 1990s, and then focused on the Tahuna upgrade. He said the upgrades were prompted by increasing public awareness of environmental issues in the early 1990s and the introduction of the Resource Management Act but, usually, communities upgraded their sewage treatment systems consistently across time.

As communities became more aware of related issues and what could be done to address them, they would do what they could afford to.

''It's not something you don't do, because that's when you get in trouble.''

Cr Noone said that over the 20 years, many debates had been had and decisions made about how much to spend, on what, to upgrade sewerage and sewage treatment, but the result showed it had been a robust strategy.

Sewage was not a glamorous topic but its treatment was critically important to the city, and he was happy to have infrastructure in place that would set Dunedin up for the next 50 years.

The news for ratepayers is that this infrastructure costs money to maintain and operate, so the drainage rate, which rose to cover the upgrades, is unlikely to reduce any time soon.

For now, the system was good, Mr Turner said.

''The next challenge is for people to improve the stormwater.''