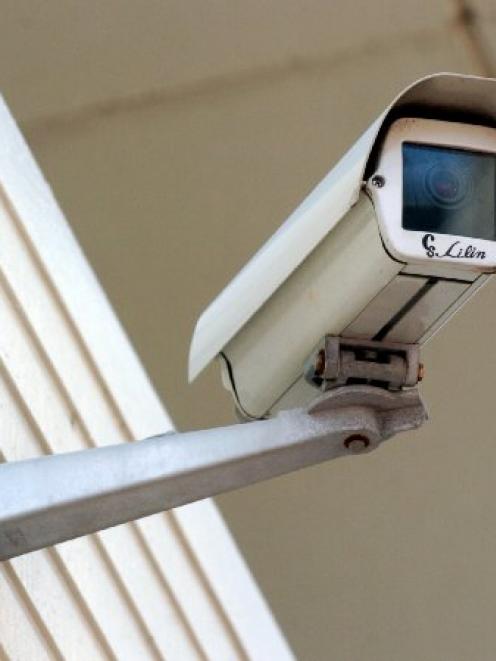 A closed circuit survelliance camera at the Dunedin Public Library plaza. Photo ODT files
Closed circuit television (CCTV) cameras could be installed in the city centre by Christmas, after the Dunedin City Council voted yesterday to access a fund last used in the 1970s.

The decision, at a council meeting in Middlemarch, followed news last week funding for the cameras had fallen short by as much as $52,500, but the last-minute discovery of a fund for comprehensive urban renewal in North Dunedin could fill the gap.

Council chief executive Jim Harland told the meeting it was understood there was no legal impediment to using the money.

Mayor Peter Chin said approaches to national insurance companies for funding were still under way, and that was still a possibility.

Responding to a question from Cr Paul Hudson, Mr Harland said trained volunteers would be viewing the feed from the cameras, at no direct cost to the council.

If the council voted to go ahead, the cameras would be in place by Christmas.

Cr Guest asked for security and privacy protocols to be put in place, and the council voted for that, and to continue to seek external funding, with any extra funds required being taken from the comprehensive urban renewal fund.

• The council will make an announcement on the future of the harbourside in the next week, after non-public discussions on the issue yesterday.

The matter is before the Environment Court, and the Otago Chamber of Commerce and Dunedin businesses have strongly opposed a plan to redevelop the area.

Mr Chin said it was discussed yesterday in a non-public part of the meeting, but he would not discuss the matter until he made an announcement in the next three or four days.

Land purchase and funding for the realignment of State Highway 88 was also discussed, but no further information was forthcoming from Mr Chin last night.

There was no discussion on the future of Carisbrook and its surrounding properties; instead, an agenda item relating to the matter was just to confirm minutes from a finance and strategy meeting, he said.