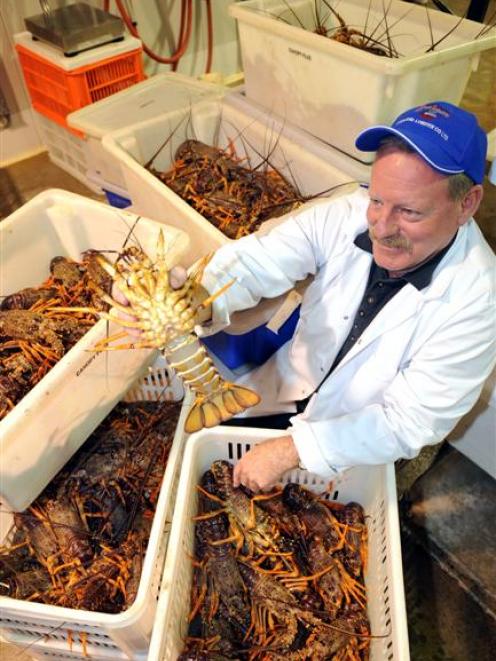 Euan MacDougall takes a look at early season crayfish as it arrives at Fiordland Lobster's Dunedin factory. Photo by Stephen Jaquiery.
The crayfish season had a "spectacular" start, but already approaching bad weather is starting to affect catches.

Boats headed out for the first time on Sunday and crayfish were starting to flood into Dunedin processor Fiordland Lobster to be weighed and graded before most were flown live to markets in Asia.

Fiordland Lobster Otago area manager Euan MacDougall said it was still early days but the company anticipated processing the bulk of the Otago quota of about 123 tonnes.

Unlike the rest of the country, which can fish all year round, Otago's crayfish season only runs from June to November.

It was expected most of Otago's quota would be fished by mid-to-late October.

Pleas to Fisheries Minister Jim Anderton to extend the Otago season had so far not come to fruition, he said.

Although unpredictable weather cut the catch by half yesterday, plenty of stock was available.

The good start was the result of the quota management system and the practice of "high grading" finally paying off, Mr Bartlett said.

About 60% of the catch - the smaller, but still legal crayfish - was being thrown back, leaving fishermen with bigger crayfish and as a result a better price.

It also increased the stock on the sea bed.