By Fiona Ellis
0 Comments
The Maori myth of Earth’s creation has inspired Dunedin pupils to stage a prizewinning performance.

St Hilda’s Collegiate School pupils have been named the regional winners of performing arts competition Showquest, which was held in Invercargill last month.

Poetry and dancing invoking Earth-mother figure Papatuanuku and goddesses Hinemoana and Aphrodite won the team of about 50 pupils the Southland/Otago open category.

Year 12 pupil Tunmise Adebowale wrote and performed a poem as part of the performance.

The pupils wanted to tell a lesser-known story.

"When we did our research we realised not as many people actually know about Papatuanuku." 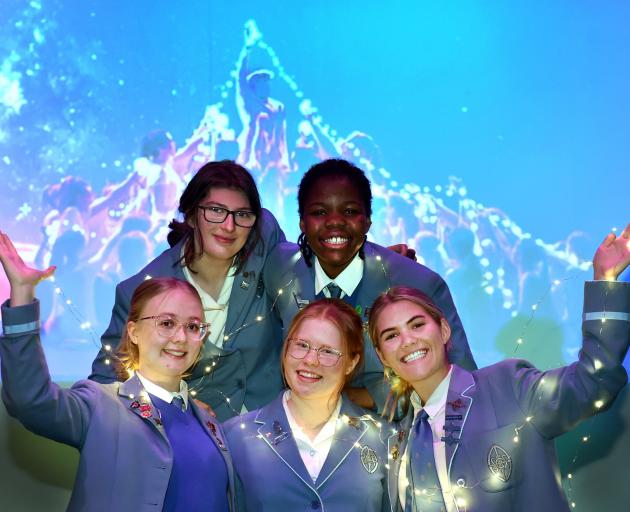 St Hilda’s Collegiate School pupils (from left, front) Olivia Wilkinson, Lily Knox and Stella Rathbone, and (back) Sarah Daley and Tunmise Adebowale are part of the team which won the regional division of national arts competition Showquest. PHOTO: PETER MCINTOSH
As one of the group leaders who oversaw the performance, seeing the hard work of others come together on the day was a highlight, she said.

Performances were filmed rather than staged before a live audience due to Covid-19, which was a continuing source of disruption during rehearsals.

"What was surprising was that when we got to the actual performance, nobody was sick."

Taking to the stage after just six weeks of preparation, she was not expecting the team to win.

"We weren’t thinking about placing or anything, we were just happy to be on stage."

The recorded performance is now set to be considered by judges in the national finals.