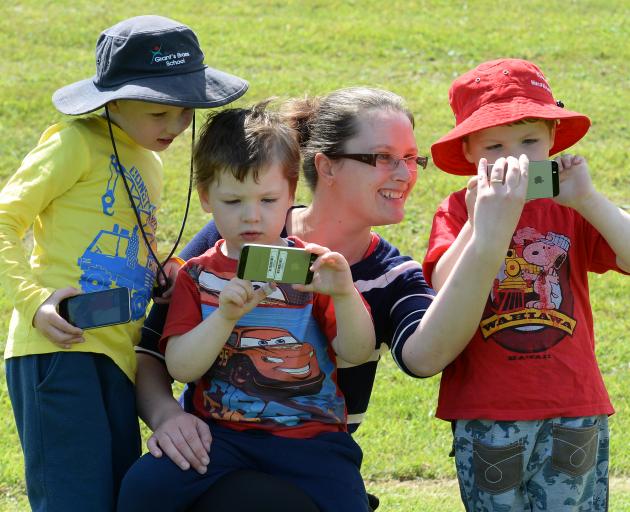 Playing an augmented reality smartphone game at Caversham Reserve yesterday are Eloise Sime and her sons (from left) Charlie (6), Quintin (4) and Lachlan (4). Photo by Linda Robertson.
An empty Dunedin reserve has been taken over by dinosaurs, kittens and unicorns as part of an augmented reality game aimed at keeping the city's children active.

The Dunedin City Council has spent $2650 to buy the rights for the game, called Magical Park, so it can be played at Caversham Reserve, off South Rd, using a smartphone or tablet.

It has already been set up in other locations around New Zealand.

Council recreation planning and facilities manager Jendi Paterson said the game was aimed at getting ''kids off the couch and active outside''.

The game uses augmented reality and like the smash hit game, Pokemon Go, superimposes creatures over the real world.

''We chose this location because the community were so keen to do something positive, and we needed a reserve that didn't have a lot of physical barriers, like playground equipment that children could run into.''

The council worked with Caversham Community Group to install the game locally.

Geo AR Games and the New Zealand Recreation Association worked together to get it up and running in New Zealand.

''We've bought a licence for the game for a year.

''Depending on how well it's received, it's something that could be extended to other reserves in the future.''

Game development was ongoing and would include extending device availability, adding extra games such as an Easter game, and making more difficult levels.

People who wanted to play could download the free Magical Park app from the Apple App Store or Google Play.

Once downloaded, data usage was minimal, as data was used only to locate the player on the field.

Eloise Sime, whose three sons played the game yesterday, said it was a ''really cool'' way for children to get into technology while also getting exercise.