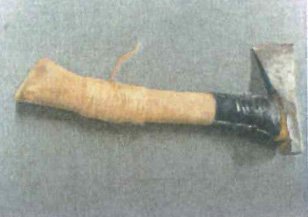 The 34-year-old’s face was blackened, he was wearing a head-torch and there was a hatchet protruding from under his seat, the Dunedin District Court heard yesterday.

It was more than enough for officers to conduct a warrantless search of the vehicle, which was parked in Kitchener St at 2.20am on August 9 last year.

Inside a black bag on the passenger seat were two pry bars, a modified chisel, a pair of black gloves and another head-torch.

There was a second sports bag under the seat containing 5g of methamphetamine, $540 cash and Wilson’s passport.

He later pleaded guilty to charges of possessing the class-A drug and possessing instruments for burglary.

Wilson refused to offer an explanation for the haul when initially interviewed by police but played down the suspicious circumstances when later speaking to Probation.

He said the car was not his, nor were the drugs and he was not aware the meth was even in there.

Wilson claimed the tools were for work as a panel-beater.

"I don’t accept much of that as true," Judge Kevin Phillips said.

Counsel John Westgate said his client had no similar convictions in his history and would unlikely be back before the court.

"Whatever space this man was in when he committed this series of offences he’s not in anymore.

"He’s living in Auckland ... he has a full-time job and he has put the influences he was under and the people he was hanging around with at the time well and truly behind him," he said.

"This was a bad period in his life for a short period of time."

The burglary kit — "aka the panel-beating tools" — would be forfeited, Judge Phillips ordered.