By John Lewis
0 Comments
There were no stand-up chameleons at the show, but still the people came and left with smiles on their faces.

The inaugural Reptile and Aquatic Expo was held at Forrester Park at the weekend, giving Dunedin residents an opportunity to get up close and personal with funny-looking species and learn about keeping them as pets. Some were up for adoption.

One of the most popular attractions was an Australian eastern blue-tongued skink named Wybie.

Most were scared of him and were keen to observe from a safe distance.

But James Purvis (7), of Lawrence, relished the opportunity to have the exotic pet draped over him. 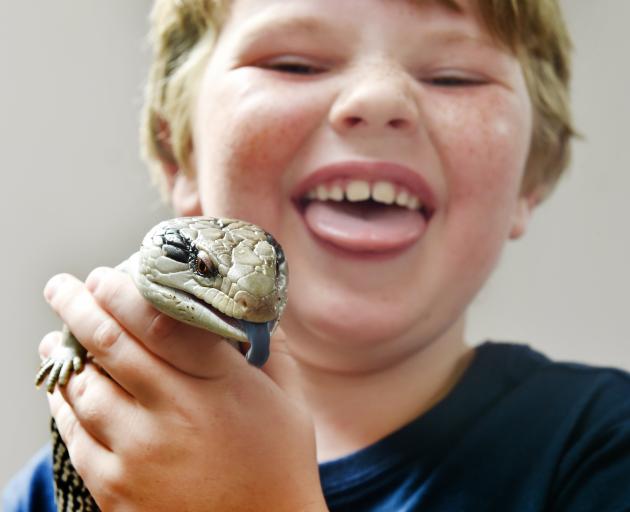 "I’ve come all the way from Lawrence to see this. They’re really interesting.

"The claws were digging into me and they were quite spiky.

"I love lizards. It’s been my dream to have one."

University of Otago zoology student and Wybie’s owner Oscar Martel said Eastern blue tongues were very popular as pets because they were "super smart" and did not need a huge enclosure compared with their size.

"Wybie’s enclosure is made from an old wardrobe.

"And they’re quite affectionate. They’re one of the only species that are.

"They’ll actually seek out affection. They’ll fall asleep on you, they’ll rub their heads against your hand like a cat — they’re so sweet."

However, blue-tongued skinks lived for up to 40 years and it was important for prospective owners to do their research on them before buying one.

"I’ve got him for the rest of my life. You have to be quite sensible about considering them as pets."

Other animals on display included axolotls, a bearded dragon, turtles and various frogs.

Event organiser Amelia Seales was delighted with the turnout.

She said she was inspired to run the event because she rescued axolotls and reptiles in her spare time, and she wanted people to know more about their care.

She hoped the expo would become an annual event in Dunedin.