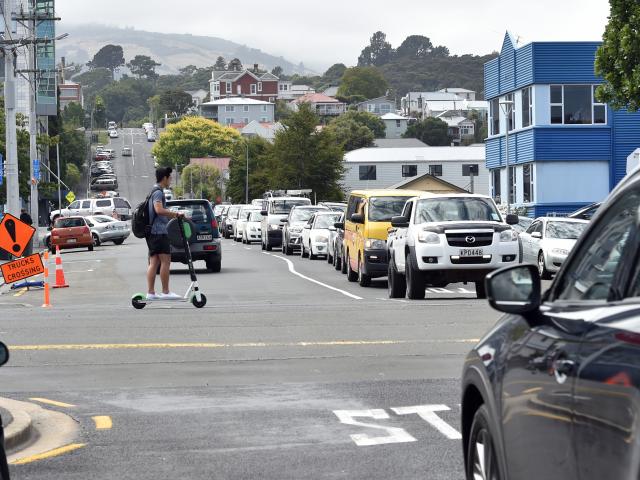 The intersection of Clyde and Albany Streets PHOTO: PETER MCINTOSH
Students have called for a safer crossing on Albany St in the latest Otago University Students' Association referendum.

The results of the referendum, held at the end of May, were released this week.

Only a fraction - 1900 from a student population of more than 10 times that many - chose to vote.

However, 78.6% of voters said they wanted a safer crossing in Albany St, where the main University Link building including the central library is located, and supported OUSA lobbying the Dunedin City Council.

Minutes of an OUSA executive meeting said it was "only a matter of time before someone is injured" near the OUSA clubs and societies building on the street.

Business owners in Albany St also said it would be a good idea.

The owner of Eureka Cafe and Bar, located further down the street, said traffic in the area was "absolutely ridiculous".

The Dundas St bridge was blocked off until August, diverting traffic down Albany St, and introducing a pedestrian crossing on Albany St after the bridge reopened would be sensible.

The OUSA has said in the past the referendum gives rise to a "moral obligation" to look into the possibilities, rather than being legally binding.

Environmental worries featured strongly in the referendum results - 69.7% of students who voted wanted more solar panels to be installed on university buildings, and students also voted to lobby the university to stop boiler use.

After the purchase of Starters Bar last year, investigating buying another student pub was also supported by 53.3%.