Damaged woodwork on entrance to be repaired 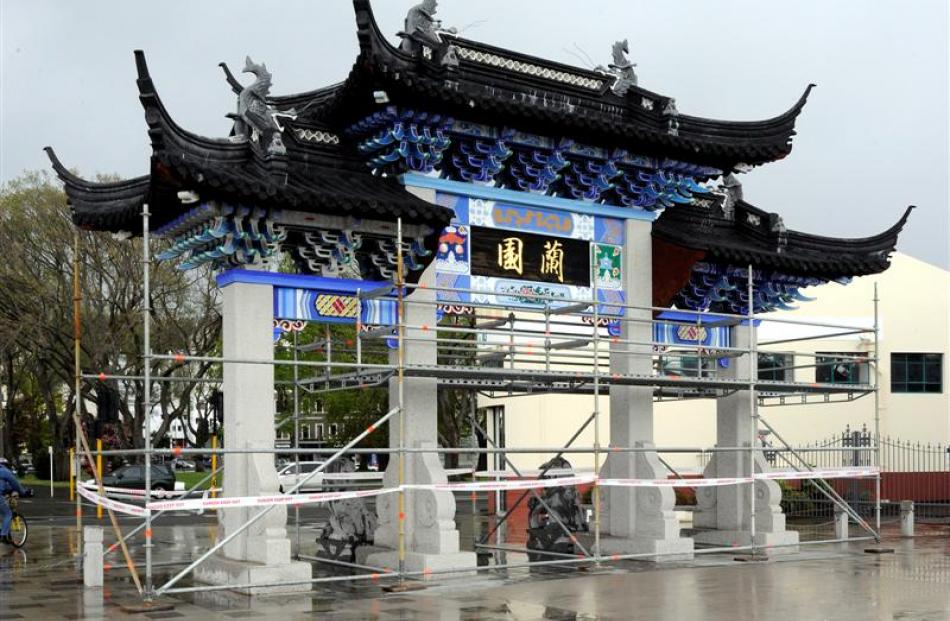 The Dunedin Chinese Garden entrance is surrounded by scaffolding, following the discovery of hairline cracks and other weather damage needing repairs. Photo by Gerard O'Brien.

The Dunedin Chinese Garden's ceremonial entrance is undergoing a "substantial" refit two years ahead of schedule, following the discovery of hairline cracks and other weather damage.

Scaffolding began appearing around the Pai Lau ceremonial entrance yesterday and the six to eight-week project was expected to be under way next week.

The garden will remain open.

Instead of earthquake damage, they found weather damage causing hairline cracks that had been invisible until the close inspection was carried out.

A more thorough inspection since then had found peeling and fading paint, causing unprotected wood underneath to crack, she said.

The repair bill could run to $40,000, but most - if not all - of the cost was expected to be covered by donations to the Dunedin Chinese Gardens Trust, she said.

One "substantial" anonymous donation towards the cost had already been received, and others were expected to be confirmed next week, but details remained confidential at this stage, she said.

The entrance - like the rest of the $14 million Chinese Garden project - had been completed in 2008 by a team of 20 Chinese artisans brought to Dunedin specifically for the project.

The council had contributed $1 million towards the construction cost, and Ms Reid said maintenance of the entrance had been expected to take place five years later.

That had been brought forward by two years following the discovery of the damage, she said.

It appeared Chinese-made paint used to complete the work was to blame, as it did not contain the protective additives of New Zealand paint, which was designed to protect against harsher ultraviolet (UV) light, she said.

Repairs would involve patching up damaged woodwork and repainting the entire structure.

Consideration had been given to flying Chinese artisans back to Dunedin to complete the work, but tighter immigration laws meant it was unlikely they would have obtained work visas, she said.

The work would instead be carried out by Dunedin firm Murray Turner Decorators, using detailed photographs of the existing freehand paint job and paint-matching to ensure colours matched, Ms Reid said.

"It really is just painting work. What was important was how it was painted in the first place, to get the right look of it."

The extent of the problem and the work required had come as a "surprise", but other maintenance work inside the garden remained on schedule, she said.

However, the final cost of repairs remained "a big unknown", as the weather would dictate how long workers remained on site, and the council could yet pick up some of the total cost, she said.

"It could go quite a bit one way or another."