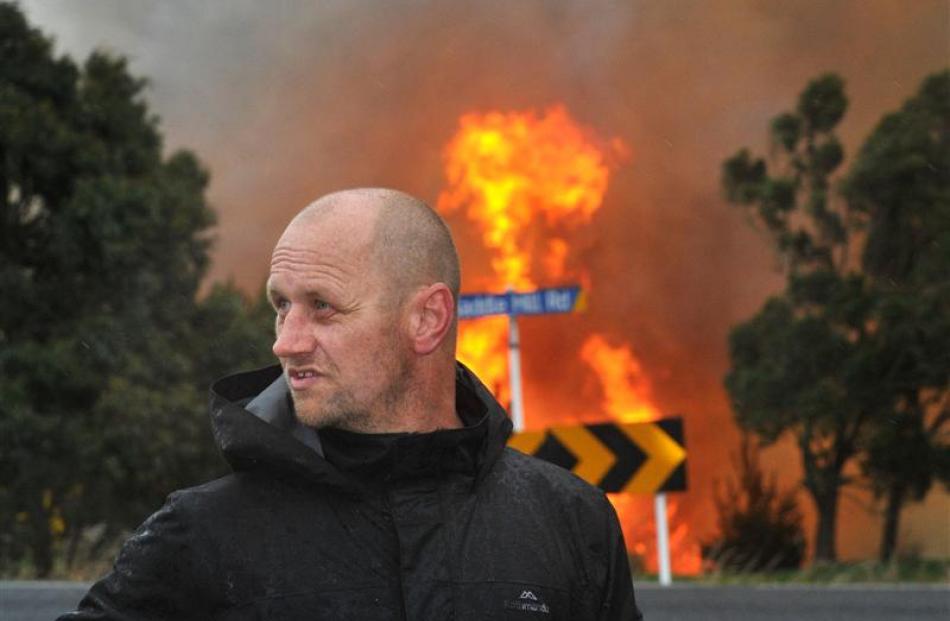 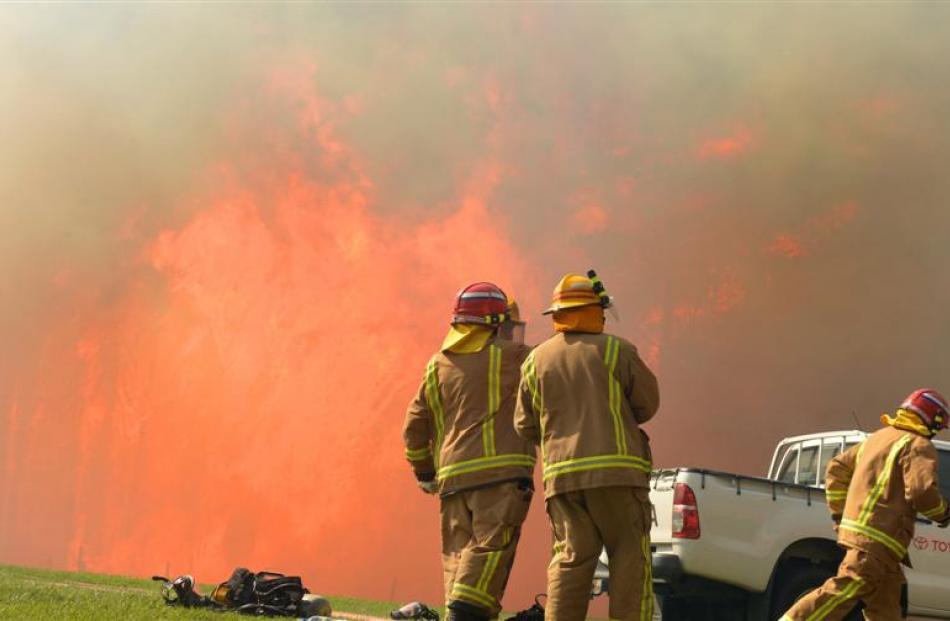 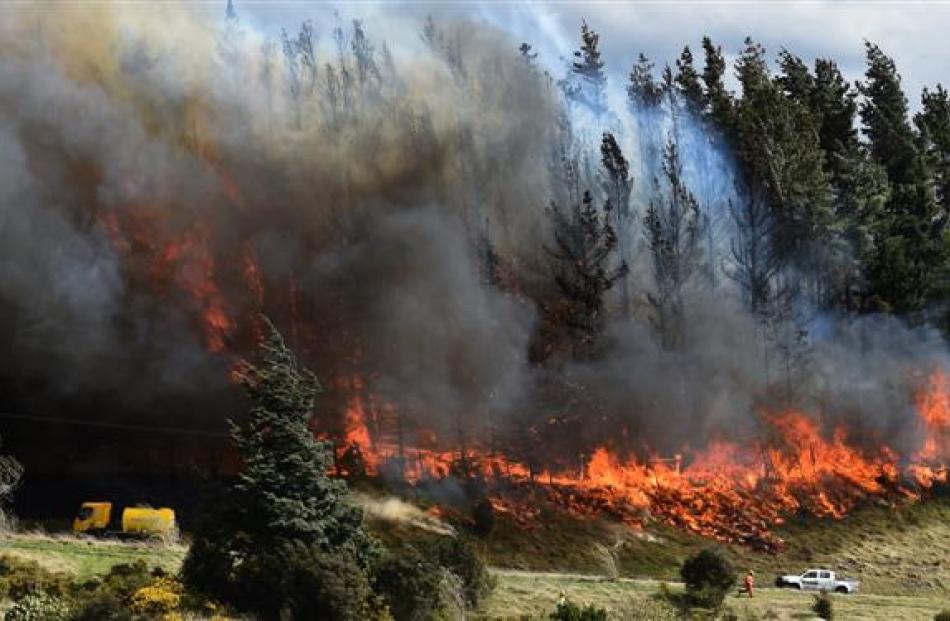 Flames leap into the air from trees on the lower flanks of Saddle Hill above the Southern Motorway. Photo Stephen Jaquiery.

Firefighters have now contained the vegetation fire that raged across Saddle Hill yesterday, damaging properties and leaving a woman in a serious condition.

The flames swept through 50ha to 100ha, damaging ''up to nine'' houses and forcing residents and livestock to be evacuated.

Crews remained at the scene overnight, dampening down hotspots, and the New Zealand Fire Service said this morning the blaze had been contained.

Firefighters would remain on site for the next 12 hours and continue to mop up and extinguish hot spots.

Roadblocks remain in place and access is for residents only. Other people are asked to stay away from the area.

The fire service said conditions were still extreme and likely to remain so for the rest of the week. Land owners wre strongly advised not to light any fires due to the extreme weather conditions.

St John tended to other people at the scene but they did not require hospital treatment.

Three firefighters were treated for smoke inhalation and heat exhaustion and the fire was still ''uncontrolled'' about 6pm.

The Saddle Hill fire was the most serious of several fires that broke out across the region yesterday.

Near Dunback, a fire burned 100ha to 150ha of vegetation, destroying a hay barn and threatening four homes.

Tapanui, Clutha Valley and Balclutha volunteer firefighters were called to several small fires, mainly in trees, across the Clutha district yesterday, while in North Otago, brigades were called to small vegetation fires in the Weston and Glenavy areas.

Outram station officer Fred Donaldson said it was believed the cause of the Saddle Hill fire was ''suspected electrical power lines arcing''.

''Sheep, and hens in a hen house'' died in the fire, but the number of animals dead was unknown.

''Because of the wind driving the fire, it was racing through the trees and it was causing a hell of a heat,'' Mr Donaldson said.

''Smoke was a big problem. [It had a] very heavy smoke grading.''

''The fire came right round the house at the back and we were able to knock it before [it] actually caught the house.''

Mr Donaldson said it was the first time he had been to a fire that threatened or damaged so many homes at one time.

The Southern Fire Communications Centre said last night Coalstage Rd, Saddle Hill Rd, Quarry Rd and Morris Rd would remain closed until further notice. People living in those roads would be notified by police when it was safe to return home.

''Fire conditions remain extreme and are likely to remain so for the rest of the week.

''We ask that all people in the vicinity of these fires please follow the instructions of the emergency services and stay away from the area.''

A Southern district police spokesman said several streets were evacuated in the area. He was unable to confirm exactly how many homes were evacuated.

Senior Sergeant Brian Benn, of Dunedin, said small fires were still burning in a triangle between Saddle Hill Rd, Coalstage Rd and Morris Rd but they were controlled and a fire crew was still there ''dampening down'' about 9.30pm.

''We are not letting people back in that area because of the possibility of a wind change.''

The fires were burning on both sides of the Southern Motorway.

State Highway 1 between Fairfield and Mosgiel was closed for a time because of dense smoke but was reopened about 4.20pm.

A house in Chain Hills Rd and three houses in Coalstage Rd were among those damaged by the fire.

The blocks would stay in place overnight. The wind would dictate when they were lifted.

At the corner of Saddle Hill Rd and McMaster Rd, the fire threatened about five homes.

Alan Stout owns a home about 200m from the fire and, despite being advised by police to leave, he decided to stay.

''When I arrived [from town], there was fire on the road [but] I want to be able to save the house.''

Mr Stout's partner was at work and he advised her not to come home and had ''left the kids in town''.

Further back along McMaster Rd, property owner Wilma McConnachie hiked a ''fair way''to save a 20-year-old pony, but left five cats, 40 chickens and about 50 sheep behind.

''I'm just going to find somewhere to put him [the pony] for tonight, so he'll be safe,'' she said.

Alastair and Lesley Thompson, who own a 29ha property neighbouring Mr Black, were moving stock to safety.

''We would like to stay [in case] anything goes wrong. We would much rather stay here if we can.''

Fairfield Pet Motels in Old Brighton Rd was also threatened and the owner confirmed pets were in the buildings, but would not comment further.

In another serious North Otago incident, a vegetation fire threatened several sheds and a house in Battersby Rd, Enfield, just before 4pm.

Weston chief fire officer Bevan Koppert said the fire spread from grass clippings the owner was burning and ''the wind was roaring through here like a rocket''.

Fanned by the strong winds, the fire spread to two outbuildings and moved across a hedge into a building. It then hit powerlines and blew out the transformer. Fire crews saved the main house and a large shed.

The Wanaka Volunteer Fire Brigade was called to a small grass fire in Halliday Rd just south of Albert Town about noon, after trees stumps, which had been burnt, reignited.