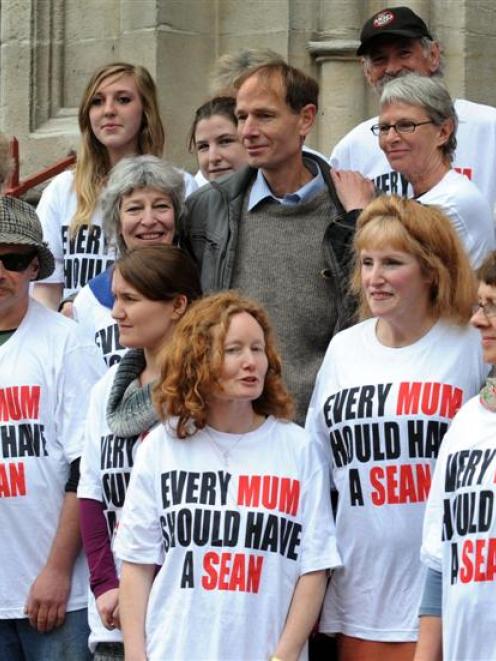 Friends support Sean Davison (centre) outside the Dunedin District Court yesterday. Inset, top, with his mother, Patricia. Photo by Peter McIntosh.
Sean Davison no longer faces a charge of attempted murder but says his conviction for assisting his mother's suicide was "a personal tragedy" for him, his family and the memory of his mother.

Dr Patricia Davison (also known as Ferguson) died on October 25, 2006, after a fatal dose of morphine. Last year, some 15 months after the publication of his book detailing the last few months of his mother's life and her death, Davison was charged with attempted murder.

"I did not murder my mother, or attempt to murder her," the 50-year-old microbiologist yesterday told journalists outside the High Court in Dunedin on what was to have been the fourth day of his trial.

"What I did to help my mother at the end of her life, I did for the love of my mother to honour her wishes," the South African-based professor said.

He had done "the compassionate thing that I believe any humane person would have done - but I am now a criminal. How can our country allow this to happen in what we consider to be a civilised society?" he asked.

Davison had just been bailed after the option of pleading to an alternative, lesser, charge brought his trial to a sudden end.

The charge, alleging "Peter Sean Romeo Davison, on or about the 24th day of October 2006 at Dunedin, incited and procured Patricia Elizabeth Davison to commit suicide, in consequence whereof that person attempted to commit suicide" was read to Davison, who was asked how he wished to plead. In a barely audible voice, he replied, "Guilty."

Justice Christine French explained to the jury she had heard submissions from crown and defence counsel (Robin Bates and Marie Grills, and Roger Laybourn, of Hamilton) on Tuesday. As a result, she had decided to grant the Crown leave to file an alternative charge of inciting and procuring attempted suicide.

Davison had pleaded guilty to that charge and the Crown was not pursuing the attempted murder, so the jury's services were no longer needed, the judge said, discharging the jurors.

She convicted Davison on the alternative charge. As conditions of his bail, Davison is to live at a specified address and report to Dunedin police each Wednesday between now and sentencing on November 24, and the court is to retain his passport.

Mr Laybourn later told the Otago Daily Times the Crown's decision not to pursue the attempted murder charge was equivalent to an acquittal. It meant Davison was not guilty of attempted murder.

Outside the court, Davison described the court process and his plea on the alternative charge as "a very stressful experience".

He said he had never denied assisting the suicide of his mother.

There would be other euthanasia campaigners who would say yesterday's court decision was "a victory for the cause" and "maybe in the days to come, I will agree with them".

"But for me, my family and the memory of my mother, today's court decision is a personal tragedy," Davison said.