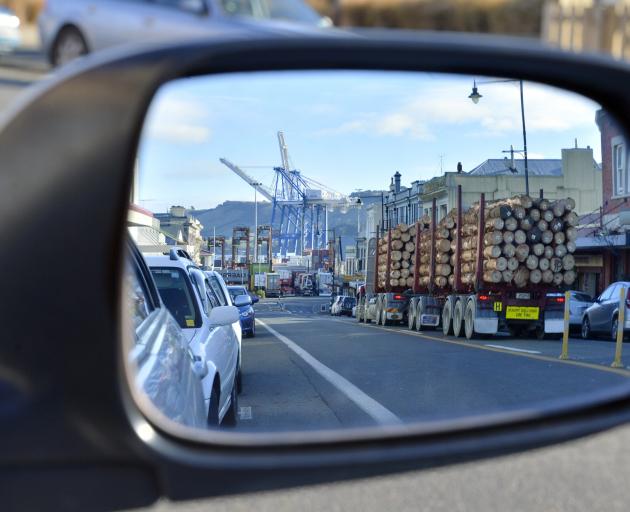 A log truck rumbles through the main street of Port Chalmers on its way to Port Otago's wharf. Photo: Gerard O'Brien
A multimillion-dollar project to deepen part of Otago Harbour- and help get log trucks off State Highway 88 - is being considered, Port Otago says.

The company has been investigating a long-term project to remove heavy vehicles heading to and from its Port Chalmers facility via SH88 since early last year.

At present, about 60% of container traffic heading to Port Otago went by rail, but 70% of log traffic - or 100 trucks on average per day - travelled on SH88 to Port Chalmers, Port Otago chief executive Kevin Winders said.

The volume of heavy traffic using the highway has prompted safety concerns for some residents, most recently when a fully-laden log truck trailer tipped over at Maia last month.

Mr Winders said yesterday the solution was not as simple as transferring log trucks' loads to rail partway through their journey.

The economics of doing so still did not stack up when logs came to Dunedin from within about 200km of the city, he said.

Instead, Port Otago wanted to see an expansion of its existing log depot at Fryatt St, opposite Forsyth Barr Stadium.

The depot already catered for 30% of the company's log traffic, which was offloaded from trucks and on to log ships, and the site had capacity for growth.

However, the shallow depth of the upper harbour channel at present meant log ships could not leave the depot more than half full.

As a result, Port Otago was considering a project to deepen and widen the upper harbour channel - between Port Chalmers and the city centre - over the next four or five years, he said.

Dredging between Port Chalmers and Taiaroa Head was largely complete, having achieved a depth of 14m, and Port Otago already had consent to deepen the upper harbour channel from 7m to 8.5m.

That dredging work was already under way, but the company was investigating the feasibility of going further, by deepening the upper harbour channel to 10.5m, he said.

The channel would also be widened as part of the project, while the realignment of some problematic bends along the route was already being planned.

The project still needed to be signed off by the Port Otago board, and would then require resource consent - potentially an 18-month process - while dredging would take a further three years, he said.

But once it was completed, fully-laden log ships - as well as other heavier vessels - would be able to navigate the route, removing the need for log trucks to use SH88.

The deeper channel would also benefit Port Otago's major customers, for example by allowing larger - but less frequent - shipments of fuel and fertiliser to be delivered to the city, he said.

A geotechnical project would soon begin, looking for any rock formations under sediment in the upper harbour channel that might prove insurmountable obstacles.

Later this year, a simulator at the New Zealand Maritime School in Auckland would be used to test whether pilots could safely navigate vessels along a reconfigured channel.

If the project stacked up and received Port Otago board approval, discussions with stakeholders and major customers would begin, followed by a consent application sometime next year, he said.

Get them off other roads as well. Two words - Rail hubs.

Excellent.
Then extend it so the cruise ships can come all the way to DN and those busses will be off the road as well.

"Dredging between Port Chalmers and Taiaroa Head was largely complete, having achieved a depth of 14m, and Port Otago already had consent to deepen the upper harbour channel from 7m to 8.5m.

That dredging work was already under way, but the company was investigating the feasibility of going further, by deepening the upper harbour channel to 10.5m, he said".
What about dredging the boat harbour while they are at it?, is that in the too hard basket?, seem pretty typical of port otago.

Dredging isn't free, and dredging something that's not going to help them financially probably isn't the best idea.

I disagree with dredging. It will undermine the local shores and speed up subsidence of the Dunedin area. It won't be long before people will want to be building hugely expensive concrete walls to stop sea rise due to global warming

Do you have any evidence to back your claims of undermining and increased subsidence?
Or is it something that just sounds right?

Love seeing big ships so close to the city, so i'm all for this idea. Some bigger cruise ships may also be able to berth a bit closer too.

I don’t think ORC is looking far enough ahead here. I think Dunedin needs to keep open all port access paths for all kinds of goods. Dredging is a problem too -destructive to the marine environment where material comes out and again where it goes back in at sea. What is this city’s economic engine if it is not the port? If people think it is ‘tertiary education’, then I don’t think they are looking far enough ahead either.