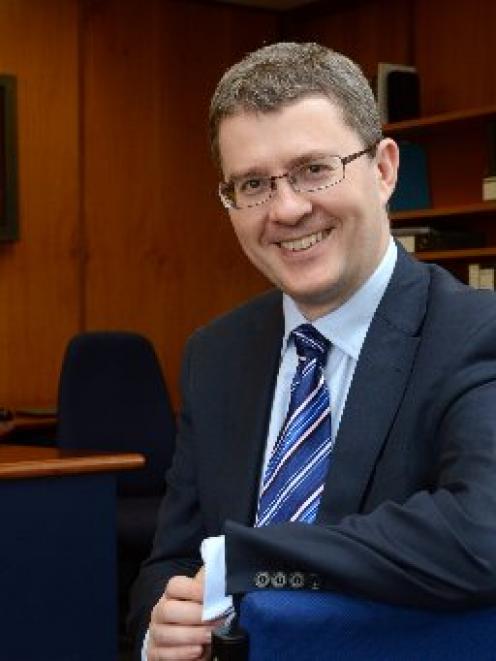 But the Welshman appointed to help transform the council - and, with it, the city - says there is work still to be done to secure council finances and the city's burgeoning knowledge economy.

And, for that reason, he has fired a parting shot at AgResearch over its ''utterly misconceived'' plans to slash top science jobs at the Invermay research centre, saying they did not make sense to him.

''That's the most that would make sense to me, not undermining one of the most significant centres of genetics [research] in the southern hemisphere.''

Mr Orders' comments came as he sat down for an interview this week, before his final day in the job today.

It was confirmed in September Mr Orders would be rejoining Cardiff Council, this time as its chief executive, after leaving that organisation to take up his Dunedin role in 2011.

He will be replaced by council services and development general manager Sue Bidrose, who was on Monday named his successor.

His departure comes just over two years after he arrived in Dunedin on a five-year contract in September 2011.

In that time, he has been credited with driving staff to find millions of dollars in savings within council budgets, helping the council limit rates rises and increase debt repayments without cutting services.

He also introduced significant changes within the organisation's structure, including a shake-up of senior management and council departments, reducing staff numbers without triggering a revolt.

Mr Orders was reluctant to take credit for the changes introduced under his watch, saying talk of personal achievements ''smacks of hubris''.

Instead, he paid tribute to the ''team effort'' involving Mayor Dave Cull, city councillors and council staff while grappling with those issues.

''If I made a contribution towards making that happen, then I'm happy with that.''

However, he believed the council had turned a corner, as there was a willingness to make difficult decisions rather than worry about ''turf protection'', and those changes would not easily be rolled back.

And there had been a marked improvement in the council's relationship with residents and the media.

''I think the organisation is different now to where it was just over two years ago,'' he said.

However, his early departure meant he left with some unfinished business, as he stressed the need to implement its economic development strategy.

The strategy, prepared in partnership with the city's key organisations, was ''absolutely the right way to go'' as the city sought to become one of the world's great small cities.

If done right, the success that followed would not come overnight, but would in the years ahead, he predicted.

''The city has in place a good economic framework, but it now needs to be implemented and driven.''

The city was already seeing ''positive signs'' of economic growth in key areas, including in the high-tech and research sectors, with Dunedin companies like Animation Research Ltd and ADInstruments leading the charge.

''That augurs well for the future of the Dunedin economy,'' he said.

However, the council had more work to do, including rolling out red carpet - not red tape - for businesses, by finding the balance between regulation and a business-friendly environment, he said.

For that reason, AgResearch's proposed restructuring did not make sense, as it overlooked the importance of building on Dunedin's existing clusters, outlined in the city's economic development strategy.

''Their plans are utterly misconceived . . . The approach should be to build on what you've got here, in terms of your agricultural science expertise, but also your genetics expertise,'' he said.

''That's the future of Dunedin, let's be clear - high-value, knowledge economy jobs . . . So for a proposal to come forward which cuts across that economic development strategy does not make sense, in my view.''

Despite that, Mr Orders remained confident the city could be one of the world's great small cities, given its range of assets, landscape and tertiary sector.

''I think it adds up to a strong city proposition, but we need more businesses. We need more successful business here. We need businesses that are creating 200, 300, 400 jobs.''

Mr Orders said he and his family had enjoyed their time in Dunedin, and his decision to leave was ''tinged with sadness''.

However, the Cardiff Council role was one of the few that would have lured him home to Wales, and he hoped the people of Dunedin would understand the reasons for his early departure.

''I think people in Otago understand the importance of family and home, and I think there's an acknowledgement that I've made a contribution, which I find satisfying.''