DCC may write off ORFU debt 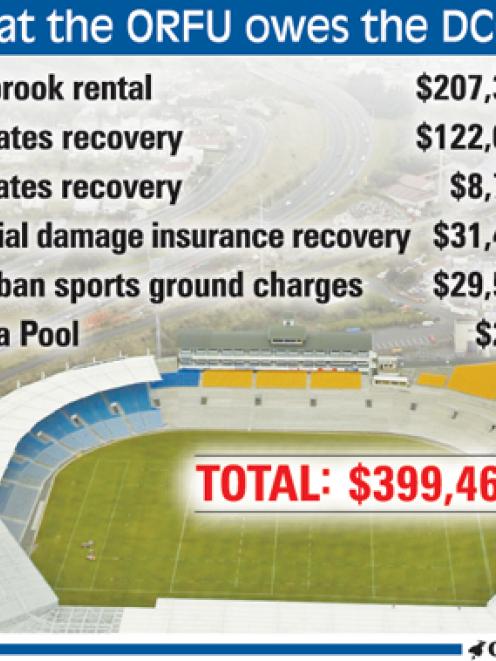 The Dunedin City Council is considering a debt write-off to help rescue the Otago Rugby Football Union, but only in return for a deal that seeks to secure the Forsyth Barr Stadium's financial future.

The package would entail the ORFU's $399,464 unpaid bill to the council being scrapped, in return for a three-year programme of top-tier All Blacks test matches at the stadium, including a Bledisloe Cup clash against Australia.

The council - not the ORFU - would receive the proceeds of the North-South charity rugby match to be played at the stadium in June, and the council wants a long-term venue hire agreement tying the Highlanders to the stadium.

The Otago Daily Times understands the deal has already been agreed to by the New Zealand Rugby Union.

The entire package still requires approval by city councillors and will be considered in a non-public part of today's extraordinary council meeting.

Details are expected to be made public if the package is approved, and Mayor Dave Cull has scheduled a press conference for later this afternoon, with Otago and New Zealand rugby union representatives to be present.

Mr Cull could not be contacted yesterday, while council chief executive Paul Orders - who has been handling ORFU negotiations for the council - declined to comment.

The developments come after the ODT earlier this month reported that All Blacks captain Richie McCaw was among a high-powered rugby delegation which was in talks with the council over a rescue package.

The ORFU is saddled with $2.35 million in debt, including $1.2 million owed to the Bank of New Zealand, on top of the $399,000 owed to the council for the use of Carisbrook after its sale, plus rates arrears and other bills.

Speculation has mounted in recent days that the NZRU would come to a commercial arrangement with the BNZ to write off the debt owed to the bank by the ORFU.

In return, the bank would get increased sponsorship opportunities from the NZRU.

The bank already has a sponsorship agreement with the New Zealand union, its logo appearing on the front of the jerseys of New Zealand Super 15 rugby sides.

Details of any other agreement with other creditors are not known, and ORFU change manager Jeremy Curragh declined to comment when contacted yesterday.

BNZ staff did not return calls, while NZRU media and public relations manager Mike Jaspers declined to comment when contacted on "what may or may not transpire".

The ODT understands the council deal is motivated by concerns its investment in the stadium could be at risk unless a long-term agreement for the Highlanders to play at the venue is confirmed.

The Highlanders franchise, owned by the NZRU, has offices inside the stadium complex, but uses the venue for matches game-by-game, leaving open the possibility the team could relocate to another centre.

That could threaten private-sector income from lounge memberships and seating packages, bought on the basis Highlanders - as well as Otago ITM Cup - matches would take place at the stadium.

The loss of income could hit $4.6 million a year, posing a risk to DVML and the council, if the Highlanders relocated and those who bought packages refused to pay, the ODT understands.

The council signed a venue hire agreement with the ORFU in 2009, which was intended to include the Highlanders, but the union and the franchise separated the following year.