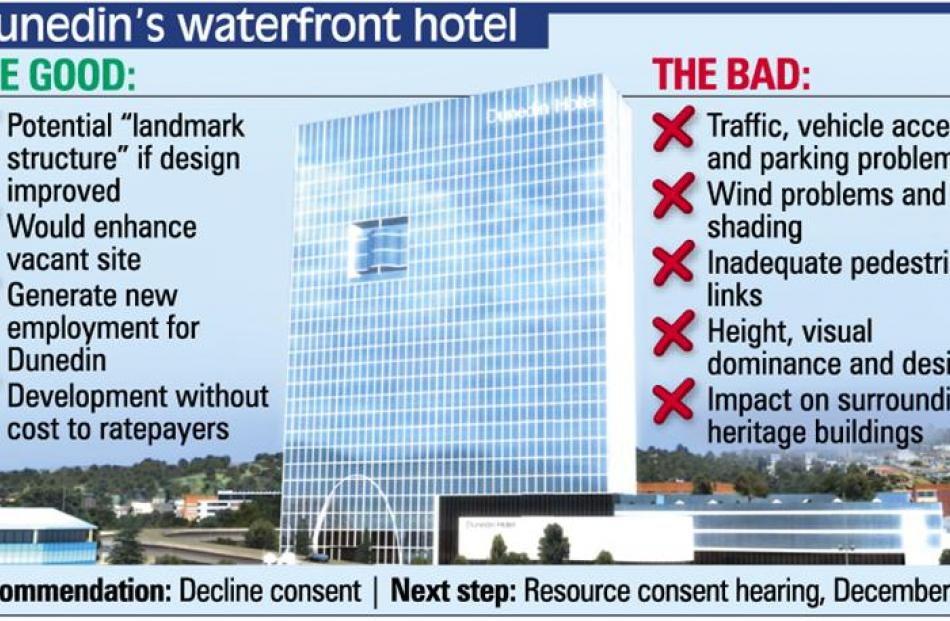 Plans for a 28-storey waterfront hotel towering over Dunedin have been dealt a blow by a Dunedin City Council report that criticises the design and recommends resource consent be declined.

However, the man fronting the $100 million project, Betterways Advisory Ltd director Steve Rodgers, insisted yesterday he was still confident the hotel would be built.

The report by council planner Lianne Darby, made public yesterday, identified the hotel's height and dominant appearance as among areas of concern.

A host of technical worries also raised doubts, ranging from traffic problems and shading to a lack of information about wind gusts magnified by the tower's height.

However, the potential benefits of the project were also canvassed, and Ms Darby's report left the door ajar by including a list of detailed conditions to impose if consent were granted, despite her recommendation.

That included referring the hotel's design to a council-appointed panel of experts for final approval, to help improve the hotel's appearance before any construction.

Mr Rodgers yesterday said he was surprised by the report's recommendation but believed including the list of conditions showed the hotel was close to winning approval.

"We think we can get over that hurdle," he said. "A wee bit of effort and we are over the line."

Council resource consents manager Alan Worthington said including the conditions while recommending consent be declined would mean a "more robust and timely process", but did not indicate which way the decision might go.

That would be up to the council's hearings committee, which would meet on December 3 to begin hearing the applicant's case, supporting evidence and public submissions.

Plans for the five-star hotel and apartment tower were unveiled in May and immediately triggered an outcry, resulting in 507 public submissions, 457 opposed, 43 in support and seven neutral.

The building is planned for vacant industrial land at 41 Wharf St and includes a rooftop terrace and bar, but is considered a non-complying activity under the council's district plan.

Ms Darby's report said about 60% of submissions objected to the hotel's height, arguing it was "too tall, out of character ... or badly positioned", and some would continue to see it as "severe and offensive", even with design changes.

"Because of its bulk and location, it cannot be missed.

Because it is located at the water's edge, it imposes its presence on the harbour view from a large range of locations."

When viewed from a distance, the hotel would not break the skyline and would therefore not "dominate" views from residential homes.

It would disrupt the outline of Otago Harbour and tower over some inner-city buildings, but the Resource Management Act did not protect views, meaning "this reason alone is not sufficient for [the] council to decline consent", she said.

On the positive side, the hotel would put underused land to use, enhance the site and provide new employment opportunities for Dunedin.

"It is a rare opportunity for a development of this size to be established in Dunedin with no direct costs to the ratepayer."

However, its design meant it would struggle to fit in its historic surroundings and there would be "some adverse effects on the heritage values of the surrounding area", she said.

The council's consulting urban planner and designer, Ian Munro, of Urbanism Plus, said the "retrospective" design appeared to be from the mid-20th century, and meant the hotel would be "stark and ... plainly out of context" with its surroundings.

It had the potential to be a "landmark structure of high quality", but only if a higher design standard were enforced, which could alleviate many concerns, he believed.

While a 15-storey, 60m-high building would better suit the site, the potential to improve the design and finish meant he did not recommend reducing the hotel's overall height.

However, a new footbridge would be needed to link the hotel site properly to the inner city, Ms Darby's report said, something Mr Rodgers addressed when unveiling early - and uncosted - plans this week for a new pedestrian and cyclist link.

Ms Darby's report also warned the hotel could cause traffic problems in Wharf St, identified a lack of parking for the hotel, and concluded shadows cast across nearby Customhouse Quay would be a problem each afternoon, year-round.

The hotel would also be built on reclaimed land at risk in an earthquake, but the report accepted engineering solutions could address that.

However, wind-tunnel testing was needed to determine the true extent of the magnifying effect of the tower on wind speeds in the area.

Next month's consent hearing would run from December 3 to 6.