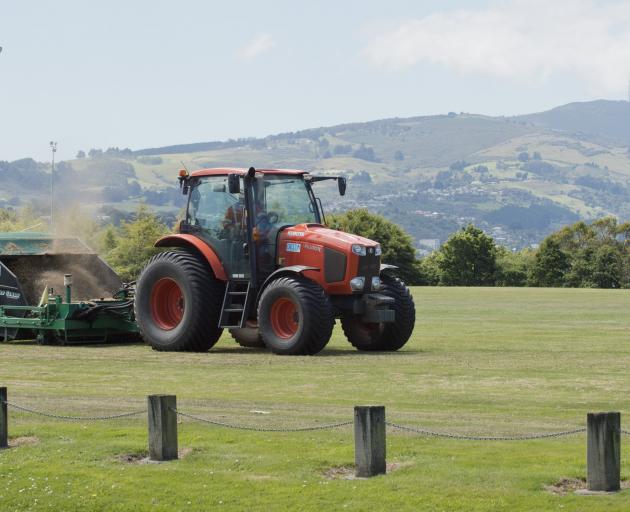 A Delta contractor works on the turf at Montecillo Park in Dunedin last week. PHOTO: GERARD O’BRIEN
One contractor will be in charge of parks throughout Dunedin from mid-2021 and it will have that responsibility for 10 years.

The move by the Dunedin City Council to combine four contracts for maintaining parks, reserves, cemeteries, trees and sports fields is a marked change and the new contract will be worth about $80 million over 10 years.

Delta lost part of its park maintenance contract in 2016 when City Care assumed responsibility for the southern part of the city, but Delta then had to intervene after cricket pitches became unusable.

After a recent review, the city council chose not to extend the shared arrangement beyond five years and instead move to what it has called a city-wide, flexible, partnering contract for 10 years.

The company that won the contract would be able to plan and invest in its staff and equipment with greater certainty.

“We want to talk to potential contractors on how we can build in provision for sub-contracting and volunteer options for community groups and smaller companies,” he said.

The new contract has not yet been drafted but will be discussed by council staff and potential contractors at a briefing early next month.

It will be put out for tender later in the month.

In 2017, seven cricket pitches City Care was contracted to prepare were declared substandard.

Delta ended up preparing the pitches throughout the city in the 2018-19 season.

A premiership football match in the city was called off in 2017 because a goal line did not line up properly with the posts and the goal line at the other end was not straight.

Mr West said the council had learnt a lot in the past few years about how to manage its contracts.

"Mr West said the council had learnt a lot in the past few years about how to manage its contracts."
Yeahhh. Managing contracts is such a new thing. The DCC has had a month short of umpty-tumpty-tum years to get the hang of it.

When you hire council people on their political affiliations and ignore their abilities, then you shouldn't be surprised that small things like contract management are alien to them.
The entire DCC staff structure needs a clean-out. Too many people hired because they support Greens strategies, too many old mates.