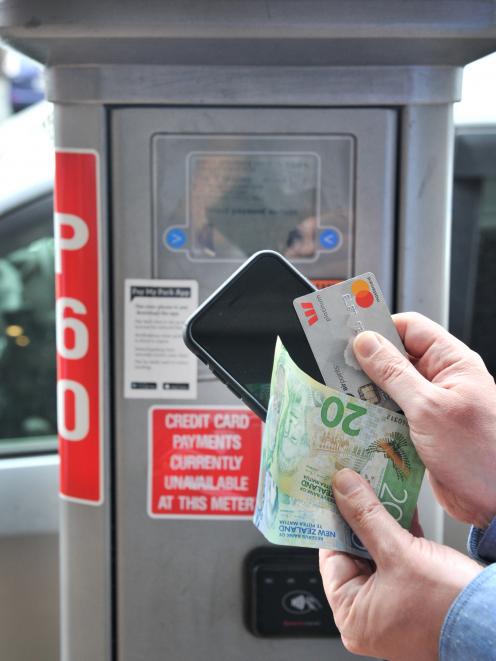 The convenience of cellphone payment is no longer available in Dunedin. Photo: Christine O'Connor
Text payments at the parking meter have been around in Dunedin for a decade, but last month the Dunedin City Council pulled the pin on the option for commuters.

The council said the move was made because the service was not a popular method of payment, but also because the outsourced service provider, Integrated Technology Solutions (ITSL), no longer provided it.

However, it was still being used by a number of parking companies as well as the Wellington City Council, ITSL said.

‘‘We assume that the Dunedin council stopped the service because it was developing its own app, which would make sense because then they don’t have to share the fees with the telcos,’’ an ITSL spokeswoman said.

Credit cards were used about 510,000 times, generating $1.67million of a total of $4.9 million in revenues (including fees) for the past year, council figures showed.

The Dunedin City Council wishes to clarify that part of its decision to stop providing a text payment for parking service in Dunedin relates to the fact the service provider, Integrated Technology Solutions (ITSL), will not be supplying the product from January next year. ITLS business development manager Blair Bickerton confirmed ITLS would no longer supply the product from January due to its own supplier no longer providing it.