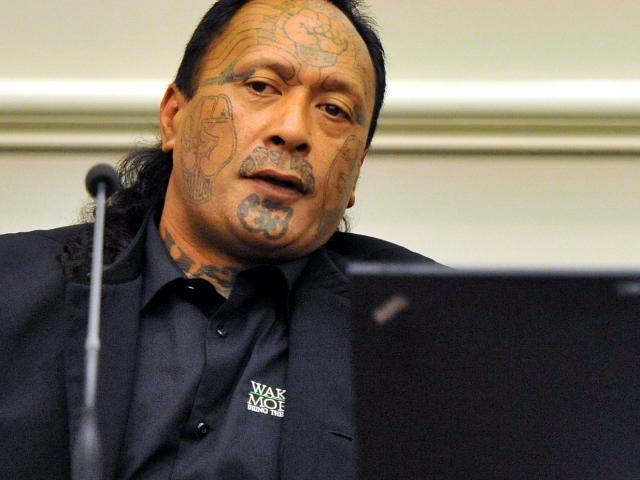 Black Power leader Albert Epere. Photo by Craig Baxter.
The Dunedin City Council is continuing to work with a trust associated with Mangu Kaha president Albert Epere, despite the gang leader landing in court for the fourth time since the arrangement began.

Epere is facing a charge of threatening to injure a Dunedin man on December 20 last year.

It is the fourth time Epere has been before the court since the trust associated with him, Mauri Kohatu Inc, entered into maintenance contracts with the Dunedin City Council in October 2015.

Epere's trust was granted a contract to perform maintenance work for the council's parks and recreation department after he and a representative from the Notorious Mongrel Mob told councillors during the 2014-15 annual plan hearings the gangs had settled their differences and wanted to change their behaviour.

The contract was suspended between December 15, 2015, and February 7 after Epere fell foul of the law.

Epere was convicted during the contract period of dangerous driving, relating to an incident on December 13, 2015, in which he overtook vehicles without indicating and reached speeds estimated to be more than 150kmh between Oamaru and Dunedin; of allowing a vehicle registered to Mauri Kohatu Inc to transport marijuana, an incident which came to police attention on November 17, 2015; and of using insulting language during an exchange with a Work and Income New Zealand employee on June 15 last year.

The contract was reinstated and further work was offered to the trust - which the court heard last year represented Epere's family with Epere as its spokesman - after the council decided the charges were unrelated to the council work and ''given the nature of the charge''.

Council recreation, planning and facilities manager Jendi Paterson, said this week it was continuing to work with Mauri Kohatu.

''The DCC does not have a contract with Mr Epere; any arrangements are with Mauri Kohatu Inc,'' she said in a statement.

''The contracting business has carried out several small pieces of work for the DCC since late last year.

''The DCC has been happy with the standard of work and recently agreed to contract Mauri Kohatu Inc to carry out parks response work such as track clearance and weed spraying. The contract term will be until 30 June.''

She would not comment further on the council's interactions with Epere or the trust while matters remained before the courts, saying it would be ''inappropriate''.

Epere's case was administratively adjourned on Tuesday and he will next appear in court on February 14.