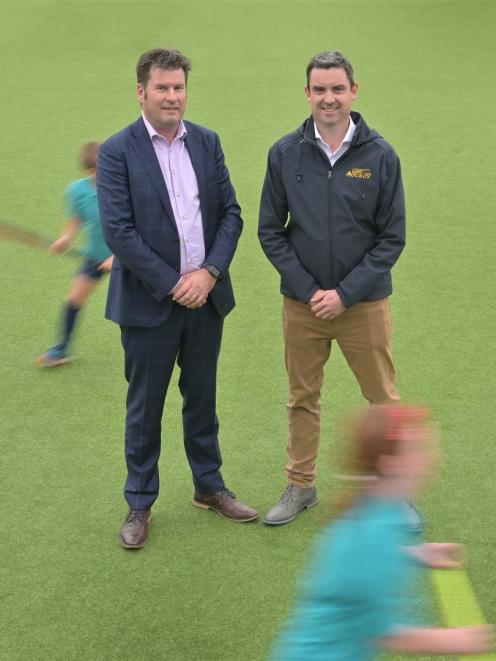 David Booth (left), from King's High School, and Andy McLean, from Otago Hockey, look to make more playing capacity at the Logan Park Hockey Turf yesterday. Photo: Christine O'Connor
The Dunedin City Council has been asked to take over the construction and ownership of a new artificial hockey turf planned for South Dunedin.

King's and Otago Hockey were fundraising for the $2.6million facility and had so far raised $1.37million. They had also made applications seeking $700,000 more.

The funds secured to date included $500,000 granted by the DCC, as part of the 2016-17 annual plan process, and the partners had a contingency to cover any shortfall in the capital cost.

Otago Hockey general manager Andy McLean said at yesterday's hearing the parties wanted the council to take over project management of the construction phase, and assume ownership of the facility once completed.

That would allow Otago Hockey - already stretched by the ownership and upkeep of two artificial hockey playing surfaces at Logan Park - to concentrate on delivering hockey in the city, he said.

The sport was growing in the city as playing numbers jumped from 1700 to 2700 in the past decade, putting pressure on existing facilities, he said.

The third turf, in South Dunedin, would alleviate oversubscribed fields and reduce the need to have some secondary school games finishing as late as 10pm, he said.

It would also deliver economic benefits to the city, if tournaments could be attracted and if Dunedin secured the right to host one of six high-performance training centres planned by Hockey New Zealand, he said.

''Hockey is on a high and we need to capitalise.''

King's board of trustees chairman David Booth said the completed facility also would be part of a sporting hub at the school available for use by other codes, including futsal, football, and the wider community.

Responding to councillors' questions, Mr McLean said the detailed breakdown of costs the council would be taking on - if it agreed to the proposal - was unknown.

Costs would include a renewal of the playing surface, costing at least $350,000, after a minimum 10 years' use, he said.

The finer points were yet to be worked through, but daily maintenance would be covered by King's and Otago Hockey could pay an annual rental to the council, he said.