Syrian immigrant Mouhannad Taha and his wife and six children were yesterday delighted to become New Zealand citizens in a ceremony at the Dunedin Centre.

''It's overwhelming and very special,'' Mr Taha said after he and his family members had become citizens at a ceremony attended by Dunedin Mayor Aaron Hawkins.

''It's been a long journey, but finally we are here today,'' Mr Taha said. 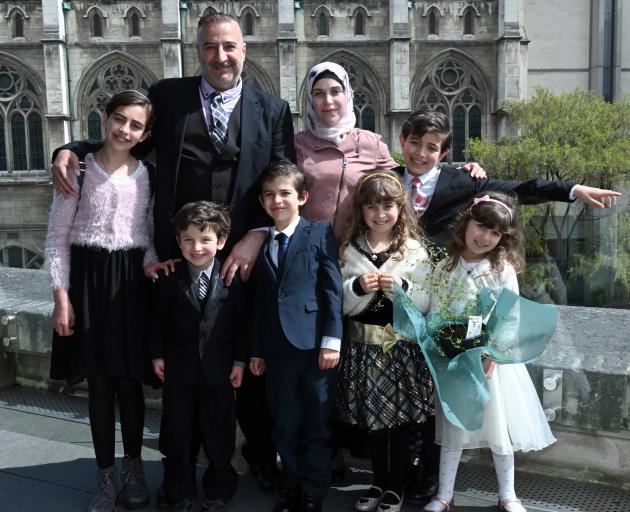 Mouhannad Taha and Lina Alhaj Shahin with their children (from left) Zenah (12), Ahmad (4), Faek (8) Noor (9), Mouhammad Ali (11) and Heba Taha (6) after a citizenship ceremony, in Dunedin yesterday. Photo: Linda Robertson
Life had become dangerous in Syria, which had long been racked by civil war, and more than six million people had left the country in recent years.

When Mr Taha flew out of the Syrian capital, Damascus, with his family in 2012, he was already thinking of Dunedin, where his brother Ahmad Taha had recently been appointed as a consultant neurosurgeon at Dunedin Hospital.

Mouhannad Taha (46), who had been a lawyer in Syria, first strengthened his English language skills through study at the University of Otago in 2012-13, then undertook two years of further study in law so he could practice here.

This week, he had taken up a new job in property law, and he and his family had also gained citizenship in a city they loved.

Dunedin people had been ''very supportive and friendly'', and he and his family enjoyed the city's attractive natural environment and old buildings, he said.