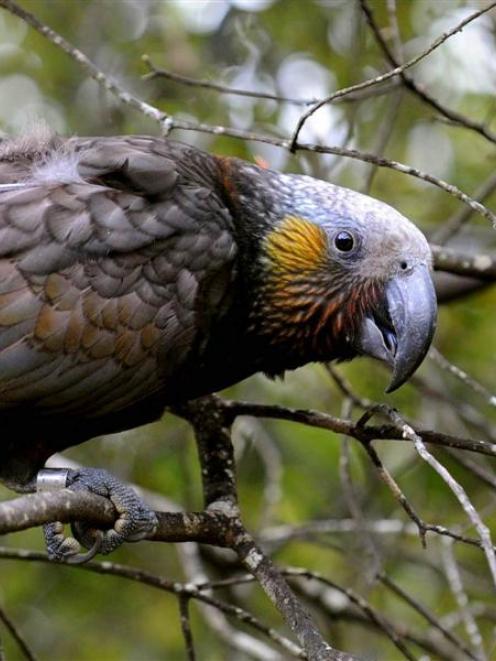 Kaka are a popular attraction at the ecosanctuary. Photo: Stephen Jaquiery (file)
Two kaka at Dunedin's Orokonui Ecosanctuary have died over the past week after likely eating bait from stations used for eradicating possums.

In a post on its Facebook page today, Orokonui staff said initial indications from autopsies of the birds suggested "the ingestion of an anticoagulant toxin was the cause".

The wildlife reserve is in the Orokonui Valley between Waitati and Purakaunui,  20km north of Dunedin city.

Orokonui staff have contacted Ospri, which is managing a large TB control programme in the Dunedin area.

This resulted in a rapid response from Ospri, and its contractors removed bait from stations across the entire operation area of the programme as a cautionary step.

Orokonui wants residents in communities surrounding the ecosanctuary to keep an eye out for any kaka - well or otherwise - and to immediately report sightings.

Dunedin’s Wildlife Hospital is on standby to treat any sick birds.

"...a rapid response from Ospri, and its contractors removed bait from stations across the entire operation area of the programme as a cautionary step...."

It has always staggered me how much NZ boasts about it's clean green image, yet spreads huge amounts of poisons and chemicals around the place.

DOC has many times stated 1080 does not kill birds especially our inquistive birds - they don't eat or investigate the baits and the baits don't kill. So, what is the science now given this event?